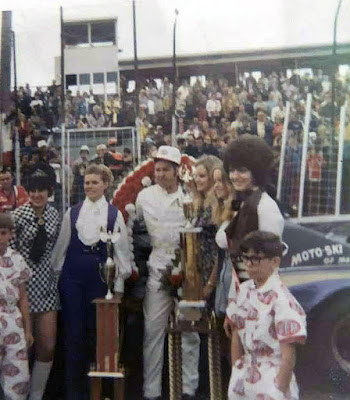 Bill Retallick in victory lane shortly after winning the National Short Track Championship 200 at Rockford.
(September 24, 1971) – “At no time did Dick Trickle have enough power to get around me,” said Bill Retallick of his victory Sunday by less than a car length in the 200-lap National Short Track Championship at Rockford Speedway.
“His car was handling a little better, but he seemed to be trying too hard and would lose it every once in a while.”
Retallick, of , driving a 1969 Chevrolet won 1,500 plus $910 in lap money in defeating Trickle of Wisconsin Rapids, Wis.
Retallick, starting on the outside of the front row, took the lead on the 18th lap coming out of turn two from Larry O' Brien of Harvard, Ill., who led the first 18 circuits coming from his pole position start. O' Brien would finish 10th.
Retallick did own more than a lap lead over Trickle, who spun on the back straightaway before the tight battle developed on the 106th lap when a crash in turn two forced a complete restart.


Dan Prziborowski of Savage, Minn., stopped along the wall to avoid hitting a spinning Tom Jensen of New Lisbon, Wis., while running second, but several seconds later was walloped by Ed Hume in the rear. Prziborowski was towed to the pits where he made miraculous repairs and returned later.
Mike Miller of New Prague, Minn., who took over second after the crash, was spun out two laps later allowing Trickle, who made up a lap deficit to grab second. Retallick and Trickle then started their nip-and-tuck battle to the delight of the 7,200 fans in attendance.
Defending champion Wayne Stallsworth of , failed to finish in the top 20 as did five-time Rockford Speedway track champion Joe Shear of .
Winners of the four 30-lap qualifying races Sunday were Bob Jusola of Shakopee, Minn., Duane Walsh of Madison, Wis., Rich Bickle of Edgerton, Wis., and Terry Bivins of Kansas City, Mo.