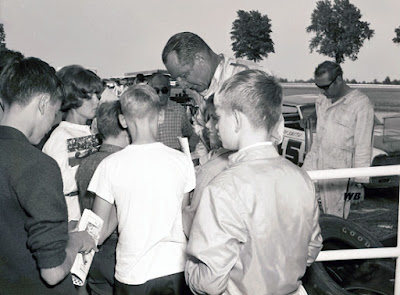 White was the fastest qualifier at 39.54 seconds in his 1967 Dodge Charger but after leading for a dozen laps, he smashed into the north fence and his car was disabled.

“You take the money and I'll take the points,” White told Al Unser in the pits a few minutes later. So White took Unser's 1967 Dodge Charger and finished sixth.

The 80 points he gained gave him a total of 2,698 for the season and put him out of reach of second place Jack Bowsher, who has 2,064 points with only one more big race left this season.

So that means next year White will drive car #1 all season and also collect the considerable amount of dollars the accessory people pay the top driver in any classification.

Although the standing-room only crowd of 23,400 fans saw no major racing mishaps Sunday, there were enough spills to cause the race to be run under the caution flag no less than six times.

Nelson never appeared on his way to victory until the last few minutes of the race when leader Parnelli Jones, driving a 1967 Ford, and A. J. Foyt, another Ford man, hit the pits on the 92nd and 96th laps with right rear flat tires.

Nelson made his mandatory one pit stop early in the race and was running well behind the leaders until they also took advantage of caution periods for pit stops. Nelson led from lap 42 to 58 until Jones passed him to take the lead.

At 75 laps Butch Hartman of Zanesville, Ohio, slipped his 1965 Dodge past both Nelson and Foyt and five laps later Foyt also passed Nelson. Hartman later bumped into the north fence and spun completely around in the south turn to lose his position.