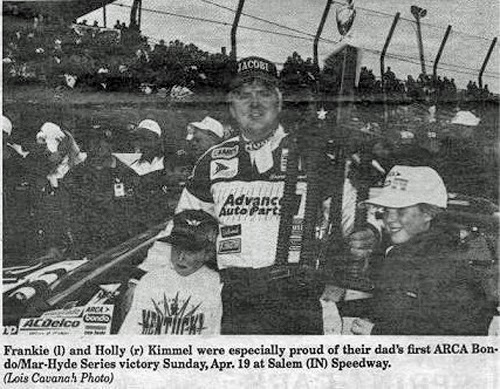 
Kimmel, from nearby , , gave the local fans the charge they were looking for when the current series points leader crossed the final finish line 3 car lengths in front of Mark Gibson, the only other driver on the lead lap. “I want to thank all my fans for standing behind us,” said Kimmel in victory lane. “We wanted this one bad I know you did to. It’s tough to survive Salem for 200 laps in your car, it has to be set up just right to do it. Fortunately my crew set me up with the perfect handle here today and showed. This car would stick anywhere.”


Kimmel was impressive on afternoon leading three times for 87 laps, nearly half the distance. However, Kimmel had his hands full for much the way having to fend off constant challenges from Bob Strait, Dill Whittymore and Gibson. Strait, who started the race from the pole, led 52 laps and was a constant threat until the 13-time ARCA winner got caught up in a turn two accident trying to sneak underneath the spinning car of Mike Lorz.


Whittymore also had his hometown contingent cranked up after leading 34 laps, but a brush with the turn four wall ended his day while running second just 21 laps from the finish. Strait, Lorz and Whittymore were uninjured.


Gibson was a show all in himself. After crashing his primary car in earlier practice session, his crew had to unload the backup car, plant a motor beneath the hood and watch as the Winder, Ga., driver methodically raced from the 29th starting position to challenge for the win.


Dear late-model specialist John Gill led 15 laps and appeared to be one of the fastest drivers in the field until his engine expired on lap 63.


The race was slowed 13 times for 78 caution flag laps, all for fairly minor incidents and debris.