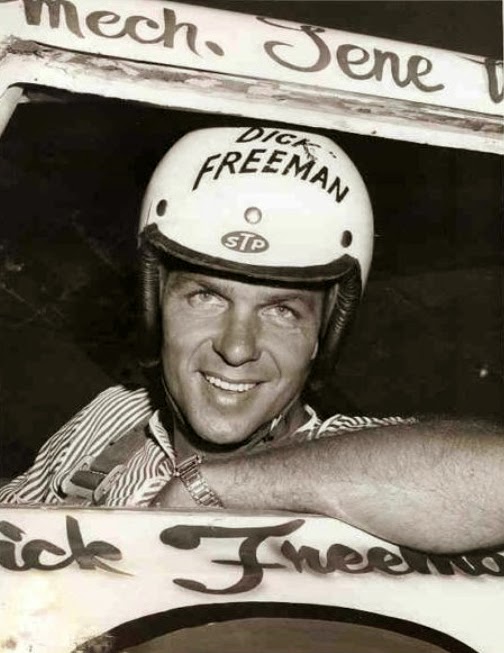 Freeman had put the smooth functioning Ford on the pole by turning a qualifying lap of 78.41 miles per hour. He then tooled it to victory in the season-opening feature here, averaging 69.843 miles per hour for the route over the 7/16-mile asphalt track.

His closest competition was provided by Roy Wathen, who made a bid to take first money on the last lap in a 1964 Chevrolet. Wathen took his Chevy to the outside but swung it too wide in an attempt to pass Freeman's Ford. He was about three car lengths back of the winner at the finish line.

With Freeman and Wathen running one-two for most of the race, the fans among the estimated 5,000 turnout who were pulling for Jack Bowsher, 1965 Ford, and Iggy Katona, 1965 Plymouth, to close the gap were disappointed.

Bowsher got a last minute ride in Jack Snow's Ford after his white No. 21 blew an engine in practice. He came in third, a half lap behind the winner with Katona right behind.

Freeman, who led the Daytona 250 for a while in the same car, felt that it handled well. He admitted that he was concerned with tire wear but that inspection after the race showed that they had stood up well. He said that he wasn't turning the track quite as fast as possible in an effort to preserve the tires. The caution flag was out for 23 laps.

The Dayton driver recalled that he was leading last season's West Virginia 500 here in a Pontiac when a tire blew. He eventually finished third in that one.

Bowsher conceded that he might have done better in his own car. The Springfield, Ohio ace, off to a good start toward his third Auto Racing Club of America championship, said that the Snow Ford handled strange to him, "especially when trying to make up ground on the leaders."

Katona was breaking in the new Plymouth in which he expects to make a run at the ARCA title. Charlie Glotzbach was turning the fastest laps in another '65 Plymouth in the early stages of the feature before it blew an oil gasket.

Harold Smith, 1965 Chevy, did not arrive at the track until after the feature was underway, explaining that he was held up by rain on the way. Johnny Ditch, who was supposed to be there in a 1965 Pontiac, did not show up at all. Among the missing also were Jesse Baird and Andy Hampton, who were slated to drive '64 Pontiacs. They both banged up their cars in a Friday night race at the Louisville Fairgrounds, it was reported. Jack Shanklin, whose Mercury also blew in practice, was fifth in the feature in a 1964 Ford.