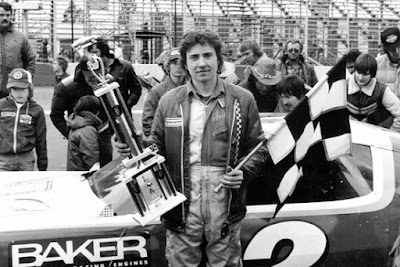 Mark Martin holds his trophy and the checkered flag after winning the Champion Motor Homes 100 at Winchester. - Brian Norton Collection
Winchester, Ind. (April 15, 1979) – Handed the lead when the first and second place runners were eliminated in a wreck, Mark Martin, the 20-year-old defending ASA driving champion, took full advantage of the situation and held on to edge Rick Knotts of Paw Paw, Mich., by one second for victory in the Champion Motor Home 100 at Winchester Speedway. It was the inaugural event of the ASA’s 1979 Circuit of Champions late model schedule.

“I didn’t expect to win this race,” Martin exclaimed after the contest. “My luck hasn’t been too good here, but it sure was today.”

Don Gregory of Columbus, Ohio, sent his Cutlass ahead of pole-sitter Dave Roahrig’s Camaro at the green and led the first lap around Roger Holdeman’s high-banked half-mile racing plant.

Randy Sweet of Kalamazoo, Mich., also pulled around Roahrig on the first lap and then sent his Camaro past Gregory in the north turn the second time around the track to grab the lead. Mike Eddy of Midland, Mich., nailed Roahrig on the same lap to take over the third spot.

Eddy passed Gregory on the sixth circuit to take over second and one lap later, Knotts moved past both Gregory and Roahrig to settle into third.

Martin started making his move to the front on lap 11, passing sixth place Bob Sensiba of Middleville, Ohio, then moved ahead of Roahrig on lap 20 and then overtook Gregory one turn of the track later.

It was Sweet, Eddy, Knotts and Martin in that order until Martin went by Knotts on lap 46 – just two turns of the track before misfortune smacked both Sweet and Eddy.

Johnny Banks of Windsor, Ont., who had brushed the wall earlier in the race with his Camaro, drifted from the top of the track towards the bottom just as Sweet and Eddy were coming up to lap him on the 48th lap.

With no place to go after he ran out of room trying to get by below Banks, Sweet plowed head-on into the steep bank at the inside bottom of the track and the resulting damage finished him for the day.

Eddy, meanwhile, cut to the top attempting to get around Banks but completely spun around without touching anything. However, the stress on the machine fouled up the clutch and Eddy, after a quick pit stop and a jump back into the action, completed just four laps before the clutch went out and made him a spectator for the rest of the afternoon.

That gave the lead to Martin and put Knotts in second and that’s the way the remainder of the race went.

John Anderson of Massillon, Ohio, finished third after a fine driving performance brought him all the way from his 13th starting position. Pat Schauer of Watertown, Wis., took fourth followed by Ray Young of Dolton, Ill.