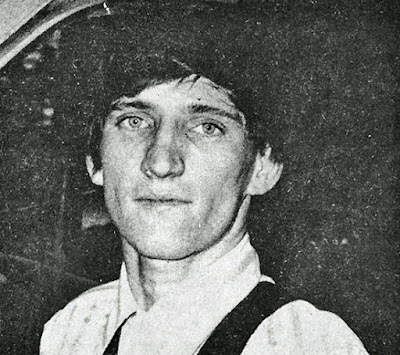 Curt Hansen
Cedar Rapids, Iowa (April 26, 1974) - Curt Hansen felt he made a mistake, but if he did it's awfully nice to right when you're wrong.

Hansen and his 1974 Chevelle Laguna led all the way in capturing the 25-lap feature for late-model stock cars, marking the second time in as many weeks that he picked up the top honors at Hawkeye Downs in Cedar Rapids.
The 20-year-old pilot from Dike started the feature on the pole, by virtue of winning the first heat involving the top eight qualifiers, and had Darrell Dake of Cedar Rapids (1972 Nova) breathing down his neck through every tour on the half-mile dirt track.
A crowd of 3,829 (paid) was bristling, obviously wondering if the veteran Dake would or could make a move, or if Hansen would make a mistake.
Neither happened and two yellow flags in the last three laps didn't alter the situation. Afterwards, Hansen was a gracious winner.
"If Dake had got out in front, I think he would have run away with the race," Curt said. "I made a mistake and didn't change tires for the feature. I should have."
"I thought the track would be like last week, so I stayed with the same tires. But the track was dry tonight. If I had started way back in the pack I don't think I could have stayed up with the rest. As the race got longer, my tires got worse."
Dake said he tried several times to take Hansen on the inside, but "it was just too slick down low.
"The only chance I had was if Curt got up in the loose stuff. But he didn't make any mistakes and I couldn't get around him."
Hansen drove with a sprained thumb, suffered in a wreck last Sunday at Knoxville. "It bothered me at first," he said, "but afterwards I didn't have time to think about it."
It was that kind of race and it earned Curt $550. Following Dake across the finish line were Verlin Eaker of Cedar Rapids, Ron Weedon of Pleasant Valley and Kenny Walton of Cedar Rapids.
Walton won the hottest heat event. The second-year chauffeur took the lead on the final lap and literally out dueled five other cars to the checkered flag. Jim Burbridge of Greeley also won a heat, while Cal Swanson of Reinbeck took the consolation.
Results –
1. Curt Hansen, Dike, Iowa
2. Darrell Dake, Cedar Rapids, Iowa
3. Verlin Eaker, Cedar Rapids, Iowa
4. Ron Weedon, Pleasant Valley, Iowa
5. Ken Walton, Cedar Rapids, Iowa
6. John Connolly, Delhi, Iowa
7. Karl Sanger, Waterloo, Iowa
8. Duane Steffe, Colona, Ill.
9. Bob Jaeger, Dubuque, Iowa
10. Red Dralle, Evansdale, Iowa