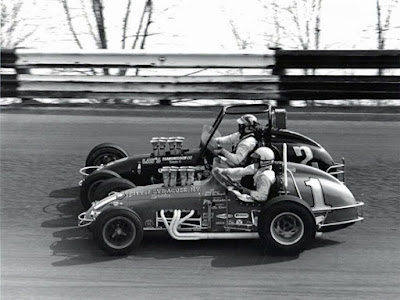 Gary Bettenhausen (1) and Larry Dickson (2) battle for position at Dayton.

Dayton, Ohio (April 12, 1970) - Larry Dickson won the 40-lap feature as the USAC sprints made their 1970 debut on the high banks of the Dayton Speedway Sunday afternoon. Dickson, driving Ken Lay’s #2 black deuce, inherited the lead on the 30th lap when Rollie Beale blew the engine in his Kilman Chevy while holding a comfortable lead.

Johnny Parsons drove a steady race to finish second in the Hughes Chevy. Third want to defending USAC national sprint champion Gary Bettenhausen in the Willy Davis #1. Fourth was Cy Fairchild in the Stahl #36 with Lee Kunzman fifth in the Leffler #4.

The race was stopped on the first lap when Claire Lawicki, starting on the outside the seventh row, drove head-on into the guardrail at the end of the main grandstand.

Lawicki miraculously suffered only a broken wrist and minor leg injuries although he was trapped in his car for some 5 minutes while rescue crews worked to free his legs from the cock pit.

Two spectators, attempted take photos restricted area where they were told to leave before the start of the race, were also injured.

On the restart to Kunzman charged out front from his pole position with Dickson second and Beale third. Kunzman led for the first three laps until Beale drove under them in the first turned to take over the lead. Once in front Beale began to build a commanding lead. Dickson and Parsons also got my Kunzman to hold second and third.

Beale was well on his way to his first win of the year and Dickson had just about resigned himself to finishing second when the engine let go on Beale's car. Dickson held a comfortable lead over runner-up Parsons at the finish. For Dickson it was his third win in four races this year.