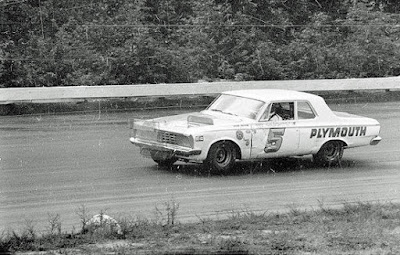 Langhorne, Penn. (September 8, 1963) – All season long, A.J. Foyt had been driving one of Norm Nelson’s Plymouths in the United States Auto Club races and had scored four victories to gain the lead in the national point standings.

Nelson, of Racine, Wis., and quite the driver himself, immediately turned the Foyt car over to Paul Goldsmith of St. Clair Shores, Mich., the defending USAC national champion.

Goldsmith, driving the Plymouth which Foyt had set records for the mile and 150-mile in May, won the 250-mile national championship for late model stock cars on Sunday in record time at Langhorne Speedway.

The runner-up was Nelson, also driving a 1963 Plymouth. He finished a mile behind Goldsmith.

Foyt came in third, six miles back, after replacing John Kilborn of Decatur, Ill., in a 1963 Dodge when Foyt’s Ford was wrecked in a collision with Johnny Rostek of Fort Collins, Colo., near the 90th mile after he had taken the lead.