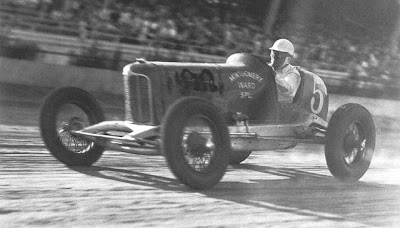 
Spencer, Iowa (September 11, 1934) - Gus Schrader, the Flying Dutchman from Cedar Rapids who holds the world’s dirt track automobile racing championship, carried away feature honors Tuesday in the motor events over the Clay County Fair oval before an estimated crowd of 12,000 people. Schrader annexed the first and the final heats of the sweepstakes event to claim the laurel wreath.

Sig Haugdahl and Emory Collins managed to shave off a piece of the title cake to somewhat dim Schrader’s sweepstakes victory when Sig took the championship dash from Schrader, Collins and Buddy Calloway; and when Collins beat out Calloway and Haugdahl in the second heat of the sweepstakes event.

The program acclaimed by the fans to have been the finest auto racing program ever presented here was signalized by the shattering of two world marks for half mile ovals.

The first world mark came tumbling when six drivers in the time trials knocked the dials off the stopwatches by speeding around the oval in 30 seconds or less time.

Starter “Chick” Hagen, official of the International Motor Contest association, stated this was the first time in history that such a record of fast time had been hung up on a half-mile dirt track in the history of racing.

Gus Schrader with a time of 27.45 seconds was the fastest of the record breakers and came within two-fifths of a second of Sig Haugdahl’s track mark set in 1931 here. Haugdahl and Emory Collins each skirted the loop in 28.20 to tie for second place.

The other drivers under the 30 second mark were Roy Lake and Buddy Calloway, while Sig Haugdahl in his last year's car completed the record sextet.

Haugdahl shattered the other world mark when he raced three laps in the championship dash in the amazing time of 1 minute and 25.20 seconds for an average of slightly better than 28.20 seconds for each turn around the oval. This time, which would be sensational in time trials for one lap, will probably stand as a half-mile dirt track mark for some years.

The flying Norwegian drew a great hand as his record was announced by Hagen, demonstrating that the cigar-smoking speedster has lost none of his large following in this section despite the fact that Schrader bested him in the sweepstakes event.

The Clay County Fair track, noted as one of the best in the country for its length, was in almost perfect shape for Tuesday’s speed events. Monday’s rain had packed it and the cars did the rest, putting it almost in an asphalt condition with only the first turn developing a slippery top toward the end of the meeting. For the time events and sweepstakes beats, the track was ideal.

The packed grandstand and bleachers - a complete sellout for the fourth successive auto program since the new stands were built - saw a thrilling series of events from the first yellow flag until the checkered emblem declared the sweepstakes victor.

They were treated to one of the greatest dashes ever seen in the United States in the first sweepstakes heat when Haugdahl and Schrader battled in a supreme test of skill, almost locking wheels as they careened into the stretch for the final burst that sent them across the finish line doing close to 90 miles an hour on the short run. The stands came to their feet with hoarse cry of mingled terror and excitement at this tremendous clash of courage with speed.

Emory Collins’ defeat of Buddy Calloway in his six-cylindered Luthy Special was another high spot, while Roy Lake’s sensational showing as runner-up to Haugdahl in the special match race brought rounds of applause for the daring little Los Angeles speed maniac.