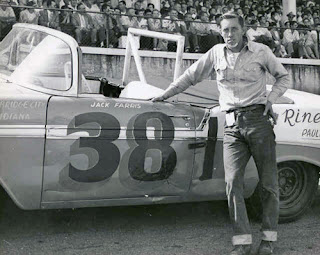 The grueling 270-mile classic on the high-banked half-mile asphalt oval sanctioned by the Midwest Association for Race Cars (MARC) for 1955-56 stock cars drew a capacity crowd.

Farris, near exhaustion as he received the checkered flag, had to be lifted from his car and helped to the judges’ stand to receive his winning trophies. He had driven the last 287 laps with the car’s right front shock absorber missing.

The battle against the rough ride because of the missing shock also left Jack with swollen and blistered hands. But his pains were soothed by the $2,000 winning check and an additional $254 in lap money, plus the huge varsity bowl gold trophy and a smaller mantel piece.

The huge trophy emblematic of winning the 500 became Farris’ permanent possession by beating the odds - winning the race two times in a row. He was victorious in 1955. Iggy Katona won in 1953 and Jack Harrison in 1954.

The huge racing throng actually never sat long, so heated was the competition. Russ Hepler, Clarion, Pa., in a Pontiac, finish second four laps behind; Rollie Beale of Toledo in a Ford, finished third; Carl O' Harold of Dayton, in a Ford, took fourth; and Jack Harrison, Indianapolis, also in a Ford, grabbed fifth. Farris’ average speed for the 270 miles was 79 miles per hour plus, including two pit stops.

The likeable Farris, a friend to all, but a feared competitor behind the wheel of a racing car, drove the locally sponsored Allen Chevrolet 1956 (#38) convertible; their ‘56 hard top which he so successfully piloted throughout the season, having been badly damaged in the Detroit 250-miler on September 9. He and mechanics “burned the midnight oil” the past week preparing the convertible, and not until Saturday night was the final work completed.

Farris started in seventh position of the 34-car starting field and grabbed the lead on the seventh lap which he held until the 76th, when Jack Harrison, who had dueled with Farris for some 50 odd laps, snatched the lead for three laps; Farris grabbing it back led until making a pit stop at the 213th lap. Russ Hepler, about two laps behind, came in for fuel at the same time but pulled out four laps ahead of Farris, who had to remove a broken right front shock absorber, change one tire and add gas.

Harrison, the leader, pitted for fuel and Hepler took over the lead. The rest of the race was a rough ride for Farris as the missing shock and speed trying to close Hepler’s four-lap lead with the wild Harrison charging at his rear tested the stamina and nerve of the Buckeye speedster. He stopped for gas at 369 laps and so did Hepler a few laps later.

On the battle surged until on the 453rd lap Hepler made a stop leading by two laps. A broken fan belt detained him too long, and when he pulled back into the race Farris held a four-lap lead, and the challenging Harrison had retired with a “sick” engine.

Farris slackened his speed some the remaining distance. Numbed by fatigue and with blistered and swollen hands he received the checkered flag and a tremendous ovation from the crowd for a job well done. As he coasted the racer to a stop, accepting a Coke and cigarette from his pit crew Farris had to be lifted from the seat and helped to the judges’ stand for presentation ceremonies.

Mrs. Farris strengthened her husband with victory kisses while 9-year-old son Johnny looked on calmly. The modest driver, choking with emotion, lauded his pit crew for the victory.

But they and the many thousand eye witnesses knew the humble Mr. Farris is one of the greatest chauffeurs in the country, and was deserving of all honors bestowed upon him.