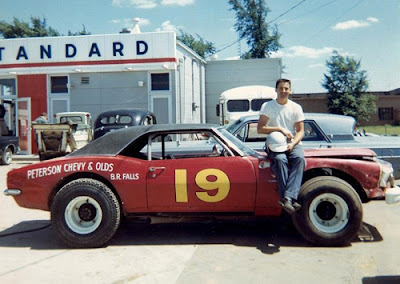 
Fountain City, Wis. (September 7, 1970) – Gulping a frothy refreshment, Harold Mueller was a picture of contentment – a check for $1,000 sticking from the breast pocket of his white coveralls and a five-foot high trophy resting on the hood of his #19 Chevrolet.

Mueller had just threaded his way thru the late model field to win the Northland 100 at Tri-Oval, the culmination of a big weekend.

Always thriving on competition, Mueller ran second to Ernie Derr of Keokuk, Iowa in a 100-lap feature on Sunday afternoon in Marshfield, Wis., and second again on that same evening at his hometown track of Eau Claire Speedway, in what would be come a tune-up for the Northland 100 on Monday evening.

“Yes, it was a huge weekend,” Mueller said smiling. “And the fact that we celebrated a little too much didn’t help much either.”

Mueller had just managed three hours of sleep on Sunday night but appeared none the worse for wear.

“This is a honey of a car,” he praised. “And this is one heckuva crew.”

Mueller sped into the lead on lap 35 when fast qualifier Dave Morgan of Rice Lake, Wis., was forced into the pits with front end problems. After setting fast time with a 21.54 second clocking and building a comfortable lead in the early stages, a sagging shock absorber would end his chances of winning.

With a mandatory pit stop scheduled between laps 40 and 60, Mueller chose to pit on lap 44. From the time he left the racing surface until the time he returned only 1 minute and 32 seconds had expired with veteran Paul Fitzpatrick of Rochester, Minn., enjoying the lead.

Fitzpatrick pitted with 45 laps to go and a broken tire wrench held up his return. By the time he got back into competition, Mueller had regained the top spot and was running well ahead of second place Dave Noble of Blooming Prairie, Minn.

“The car was amazing,” Mueller said later. “It didn’t heat up a bit and it handled perfectly.

A broken sway bar and soft shock absorber had given Mueller and his crew fits during the afternoon. But a quick repair between the heats and the feature solved the problem and set the stage for victory.

“We just threw everything back together in a hurry and she behaved perfectly,” he remarked.

The race was amazingly free of trouble. Nineteen cars started and 12 finished the long distance race. Only nine laps were run under caution.

While the checkered flag was falling for Mueller, Noble rushed to a second place finish and a $700 payday while Jon Swanson of Rochester, Minn., would be scored in third. LeRoy Scharkey, also of Rochester, was fourth and Fred Pudoehl of Winona, Minn., would round out the top five.

The afternoon’s program saw Phil Prusak of Eau Claire, Wis., and Rich Olson of Rochester score wins in their respective heat races. The consolation was won by Wendell Kuehn of Rochester.