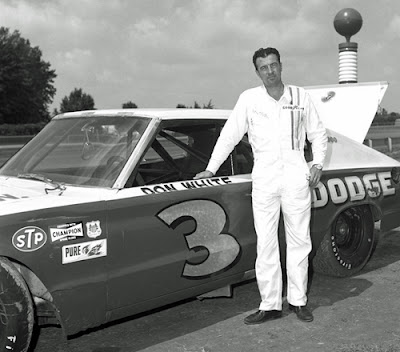 White stormed his 1966 Dodge Charger to his fourth consecutive major stock victory – Indianapolis, Milwaukee, Springfield and now Du Quoin – before a standing room only crowd of 21,000 fans on Sunday afternoon.

White won the pole position with a qualifying mile run of 39.45 seconds and then won the 100-mile contest leading wire to wire. Norm Nelson of Racine, Wis., driving a 1966 Plymouth, finished five seconds behind as both White and Nelson lapped every other car in the race.

White's Plymouth stable mate, Jim Hurtubise, recovered from almost fatal burns at Milwaukee last year, made it a three-car race early. Hurtubise ran second to White briefly but pulled into the pits after 29 laps and never got started again. He finished last in the 25-car field.

White’s victory was worth $4,337 of the $23,000 purse. Nelson earned $3,000 for his runner-up finish. Billy Foster of Victoria, British Columbia was third followed by Sal Tovella of Chicago and Bay Darnell of Lake Bluff, Ill.

Happiness and heartbreak was the storyline of the 100-mile big car race on Monday afternoon.

Tingelstad, no better than the 12th fastest qualifier in the 18-car race, captured his first major big car event and the $5,000 first place money by steady rather than spectacular driving.

He had his Federal Engine Special no better than seventh after 40 laps. He moved to fourth at 60 miles, third at 80 miles and second at 83 laps.

Elimination of front-running Knepper put him first and he breezed home easily when his chief contender, Don Branson of Champaign, blew a tire on the 91st lap.

A.J. Foyt was a surprise added starter in the same Sheraton-Thompson Special with which he won at Du Quoin twice but he could finish no better than seventh.

Bobby Unser of Albuquerque, N.M., the fastest qualifier at 34.10 seconds, held the lead for 23 laps until Knepper, charging up past Branson and Foyt in successive laps, slipped past Unser on the inside of the north turn to take the lead.

Nobody came close to challenging Knepper until his engine failure on the 88th lap.

Mario Andretti, last year's USAC dirt car national champion who entered the race trailing Gordon Johncock by only 50 points in the point standings lasted only 28 laps before leaving the race.