1961 – Derr shows ‘em how in IMCA blowout at Hutchinson 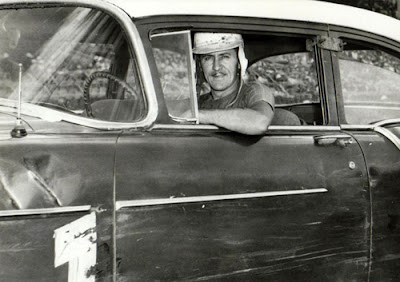 
Hutchinson, Kan. (September 17, 1961) - Ernie Derr of Keokuk, Iowa, the national point leader in International Motor Contest stock car racing, showed Kansans how he wins national titles by taking first in the feature race, the special dash and a heat race before a record crowd at the state fair on Sunday afternoon.

Derr pushed out front in the 25-lap feature and was never seriously challenged. Lenny Funk of Otis was the winner over Chub Liebe, Oelwein, Iowa, Ramo Stott, Keokuk and Jerry McCredie, also Keokuk, in a blistering four-car race for second place.

Dick Hutcherson, Keokuk, one of the nation's top three stock car racers, had troubles Sunday. Something went wrong with the suspension on the front end of his car in the first heat race and he smashed into the fence. His car was through for the day and Hutchinson borrowed a car owned by Bob Reynolds of St. Paul, Minn., for the feature, but he failed to finish that race either.

The yellow flag was out for five laps, because of Hutcherson's accident, and no time was reported for the heat. It was easily won by Derr. Bill Harrison, Topeka, was second and Ole Brua of Albert Lea, Minn., was third. Brua was in competition here this year for the first time.

A log-jam of cars on the first turn, plus a minor crash, forced a re-start of the second heat race, won by Ramo Stott, Keokuk with Funk second and Reynolds third. Knocked out of the race because of a solid crash were cars driven by Jim Clearwater, Des Moines and Newt Bartholomew, Carlisle, Iowa. Neither driver was injured.