Cedar Rapids, Iowa (April 30, 1971) - The sun is shining for Lee Kunzman, the 26-year-old race driver from Guttenberg. If you know, “Stub”, which his friends call him that should make you happy.

Ten months ago - June 5 to be exact - Stub’s world was dark. More accurately, he was lucky to be alive and, for sure, it appeared his promising career had come to an abrupt halt - forever.

The scene was 1-70 Speedway at Odessa, Mo., where Kunzman was competing in a United States Auto Club sprint car race. During one of the heat events Stub went over the wall, his car bursting into ball of fire. 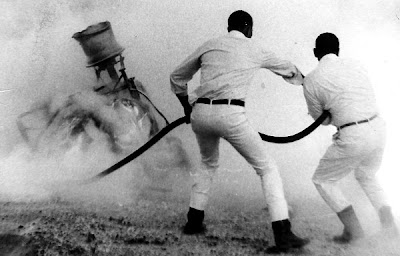 Emergency personnel rush to Lee Kunzman's burning sprint car  at I-70 Speedway on June 5, 1970. - Racing From the Past Photo

Unconscious, Kunzman was rushed to a Kansas City hospital where his injuries were diagnosed as a broken neck, broken arm and severe burns on his arm, upper body and head.

For a month he lay in the extensive care ward and it was almost another four months before doctors gave him his discharge. Yes, he could finally make it on his own, but nobody saw any chance for him to return to his first love - driving a race car.

Nobody but Kunzman, that is.

Stub couldn’t quit, at least not without giving it one more try. That try came last Sunday in a USAC midget race at Cincinnati and we want to confess we were startled by the results.

Lee Kunzman - that’s right - marked his return to racing by running off with the 40-lap feature.

Unbelievable? Sure it is and it has to be one of the greatest comebacks in the history of auto racing, a la Jim Hurtubise.

“To me it’s the biggest win of my career up to this point,” Kunzman told us by phone Thursday from his Guttenberg home. “It gave me the confidence that I could once again run hard and fast.”

“It was my first time in a car since the accident, so I’m extremely happy. I had no problems, whatsoever. Everything went just as if I was programmed to win. Yes, it’s almost like a fairy tale.”

Stub said his biggest doubt was if he could run fast enough - if he could react mentally to the situation with the memory of the accident still lingering.

“I had no fear of the track, but I was worried how I’d react in traffic,” he explained. “I promised myself if I couldn’t run fast I would quit.”

“After two or three laps it was like old times and I knew we’d be tough. I felt very comfortable and knew I could drive in traffic.”

The win should have been equally gratifying to Kunzman’s car owner, Howard

Linne of Mendota, Ill. Linne kept the car in reserve for Stub since the accident.

Comebacks such as Kunzman’s don’t happen by chance. Understandably, it’s been a tough road back. Measure it by desire.

“I never lost that desire to get well or race again,” Stub said. “In fact, I’d say my desire to race is much stronger now. The second day I was in the hospital I got very upset because my arm (badly burned) wasn’t in a cast. I told them I had a race in two weeks and I figured I could race with a cast.

“They had me pretty well drugged up and I didn't realize I was in such bad shape.”

Stub said he grew very discouraged when he was told he could never race again. That was in his early recuperation period, before he had an opportunity to talk with a doctor friend from Jacksonville, Ill.

“He told me there was a chance I could race again if I got myself physically fit,” said Kunzman. “I started doing exercises right away for neck development, as they figured that would be my biggest problem.”

“I did a lot of weight-lifting and I think my neck is stronger than ever. I went back three weeks ago for X-rays and the doctor could hardly tell where my neck had been broken.”

The burns have left their scars on Kunzman, a handsome bachelor who plays the role to the hilt, but “I don’t believe my life has been hurt at all,” he said.

“I was pretty self conscious at first, because my appearance was changed quite a bit. But I’ve gotten over it. Some people stare, but I think people in general are a lot nicer to you when you look a little screwed up.”

“I've been back seven or eight times for plastic surgery since I left the hospital in October. There’s still more work to be done, but so far they've built me a nose, eyelids and upper lip. The nose is a little larger and offside.”

That brought a chuckle from Stub and we couldn’t help thinking at the time how good it was to hear him laugh. Then, when he started talking of his future plans, there was no doubt in our mind he was ready to roll again.

“Things have been poppin’ this week since I won last Sunday,” he said. “Right now I’m dickering on a USAC stock car ride. Monday I was down in Spartanburg, S. C., looking at one of Cotton Owens’ cars.”

What about Indianapolis, where he passed his rookie tests last year, but didn’t attempt to qualify?

“I had one pretty decent offer for a back-up car, but I don’t think I'm ready. There’s not enough time to get more experience in the rear engine cars, so I’ll hold off and try to get back to Indy next year."

Know what? We’ll bet he will.