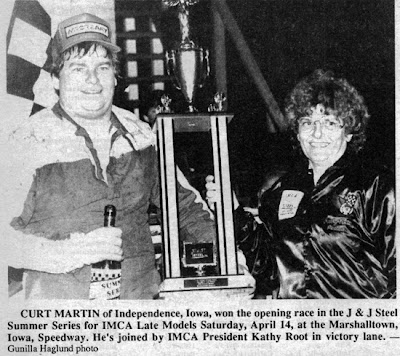 1990 – Curt Martin of Independence, Iowa, won the “Frostbuster Special” for the J & J Steel Summer Series IMCA late models at Marshalltown (Iowa) Speedway on April 14. Martin’s win did not come easily as he had to beat a stellar field of IMCA late models. Despite a light rain that slickened the high-banked quarter-mile, Martin, who started 12th, worked his way up to third place behind race leader Red Dralle of Waterloo, Iowa and Denny Osborn of Cedar Falls, Iowa by lap 30 of the 35-lap feature. Martin would overtake Osborn on lap 31 and then scoot by Dralle for the lead and the win. Osborn would get by Dralle as well to finish second while Dralle would settle for third. Steve Borts of Ames, Iowa and Todd Stueber of Fairmont, Minn., would round out the top five. 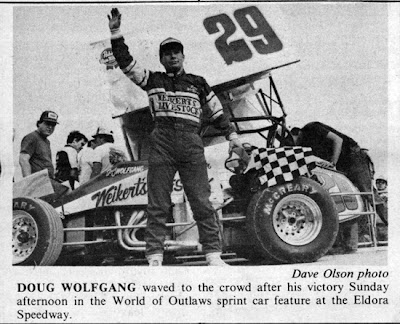 1985 – Doug Wolfgang was a double winner in World of Outlaws’ action at Eldora Speedway in Rossburg, Ohio, on April 13 and 14. On Saturday evening, Wolfgang would slip by race leader Bobby Davis Jr., on lap 13 and then fight him off for the remaining circuits to capture the 20-lap preliminary feature. During the Sunday afternoon matinee, Wolfgang would edge Sammy Swindell by less than a car-length to win the 30-lapper. Wolfgang and Swindell swapped the lead several times throughout before Wolfgang was finally able to secure the victory. Wolfgang earned $7,250 for the win. 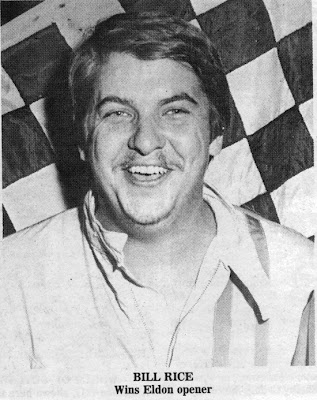 1979 – With several hundred shivering race fans on hand, defending late model point champion Bill Rice of Des Moines, opened up the season at Eldon (Iowa) Raceway with a hard-fought victory on Saturday night, April 14. Rice and Denny Osborn of Cedar Falls, Iowa, waged a bumper-to-bumper battle for the first half of the 25-lap feature. Dan Dickey of Packwood, Iowa, would join the fracas as well but Rice would hold them both off for the win. Defending track champion Mike Benjamin of Keokuk, Iowa, successfully opened up defense of his sportsman title by winning the 15-lap main event over Jim Dorothy of Keosauqua, Iowa.

1973 – Ray Para pulled his 1972 Nova into victory lane after winning the season-opening 50-lap “Ice Breaker Invitational” at Rockford (Ill.) Speedway on April 15. The East Hazel Crest, Ill., driver, who started 17th in the 20-car field, inherited the lead after race leader Don Leach of Beloit, Wis., was involved in an accident with a lapped car on the 44th tour. Leach, who had started 18th, scrambled to gain back the top spot in the remaining laps but fell short by mere seconds at the checkers. Ed Hoffman of Niles, Ill., would finish third in the event.