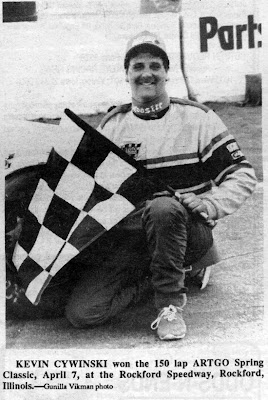 Rockford, Ill. (April 7, 1991) – Wisconsin’s Kevin Cywinski soared past Michigan’s Dennis Berry on the 70th lap of the ARTGO Spring Classic 150 before a near capacity crowd at the Rockford Speedway to score an impressive victory.


It was the second career win for the 26-year-old former Wausau West High School football and wrestling star, who is becoming quickly one of the newest stars on the ARTGO Challenge Series tour. Cywinski won the four-track Central Wisconsin Racing Association (CWRA) championship in 1986.

Dennis Lampman, in his best ever ARTGO finish, held off a determined Steve Carlson for second place money while Jim Weber and Conrad Morgan rounded out the top five,

A total of 11 of the 26 starters completed the full 150 laps, which was interrupted five times by caution periods.

Berry, in his first visit to the Rockford quarter-mile, outgunned Bob Brownell at the drop of the green flag for the lead.

Cywinski grabbed second place on lap 13 just as an eight-car mishap took place in turn four, which brought out the yellow and shuffled the field. Three cars dropped out at that point.

Following a rash of infield pit stops, Berry and Cywinski kept the crowd on the edge of their seats as the dueled back and forth on the tight oval. After repeated attempts on the inside lane, Cywinski made a spectacular outside pass coming down the front stretch on lap 70 to take the lead for good.

On lap 121, Steve Carlson ducked inside Weber for third place money as Weber glanced off of the homestretch wall at full speed. With a dozen laps to go, Carlson squeezed past Lampman only to drop back in the next turn.

Both Hansen and Shear were considered by most as the favorites going into the race, but both missed the top 16 in time trials and had to compete in qualifying heats to make the feature. A mere 28/100 of a second separated the quickest 16 timers of the 47-car field.

Larry Schuler was the fastest in time trials, but he settled for 18th after a brake problem early in the contest. Berry dropped out after 115 laps and was scored in 19th.