Cedar Rapids, Iowa (April 23, 1968) - The field for the annual Hawkeye 200 next Sunday at Hawkeye Downs has already been set at 41 late models and two of those will be handled by a pair of local favorites.

“Big” Tom Hughes of Monticello and John Connolly of Delhi, both regulars a year ago on The Downs weekly race programs, have cast their lots in a pair of 1964 Fords.

Hughes and Connolly will join some fast company for the International Motor Contest Association event. The best of the national circuit’s drivers, including eight-time champion Ernie Derr, Ramo Stott, Lenny Funk and Ole Brua, will be on hand for the 200-lapper on the high-banked half-mile dirt track.

Add to those the names of local hotshots Verlin Eaker, Darrell Dake, Bill McDonough and Mert Williams and you can see why Sunday’s starting field ranks as one of the all time best for the Hawkeye 200. 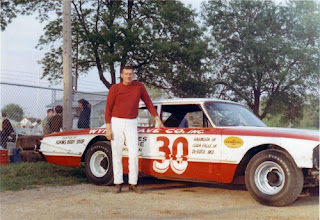 National competition is nothing new for Hughes, the 6-4, 230-pounder. Tom captured a pair of wins (25 laps and 100 laps) last summer at the North Dakota State Fair in the same machine he has set up for this season.

Connolly, one of the most popular chauffeurs at The Downs the last few years, had his share of problems last season. After demolishing his Ford in an early season wreck, he had three engines blow on him before the season ended.

Ramo Stott will have his 1968 Plymouth ready for the first time this season when the green flag goes out for the Hawkeye 200.

Stott is seeking his first IMCA point championship after trailing Ernie Derr for the last three years. At present after two events, Ramo holds a slim 15-point edge over Derr, 290 to 275.