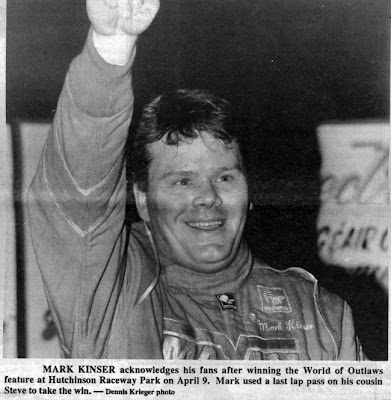 Hutchinson, Kan. (April 9, 1993) – Mark Kinser led 40 lap in the World of Outlaws’ first two “A” features this season only to finish 17th and third. In the last three main events, he has led three laps and won twice.

Mark continued his winning ways Friday night when a capacity crowd packed Hutchinson Raceway Park. Steve Kinser, his second cousin, appeared to be cruising to his third consecutive victory at Hutchinson when he drove his Valvoline #11 around Danny Wood high in the third turn. Mark steered the #5 Maxim into the vacated low groove and out-dragged Steve to the finish line for the $5,200 victory.

“The track is in good condition,” Mark told the crowd afterwards. “It’s the best I’ve ever seen it.”

“The King of the Outlaws,” a two-time feature winner at Hutchinson, chopped .272 seconds off the previous one-lap record with a 14.908 second (90.555 mph) run during qualifying.

Then Steve earned the right to start the main event on the outside pole by following Kenny Jacobs under the checkered flag in the trophy dash.

In the feature, Jacobs drove immediately into the lead as the green flag was thrown. In his wake were both Kinser’s and Johnny Herrera.

Within a lap, Jacobs opened up an eight-car-length advantage that grew to half a straightaway five laps into the 30-lap contest.

Steve caught Jacobs in heavy traffic midway through the ninth lap and took the lead with a low post move into turn four. Kinser, unable to steer clear of heavy traffic, was reeled in by Jacobs, Mark and Herrera within two laps.

Once Steve cleared himself of lapped traffic, he opened up a 10-car-length advantage. He had opened up a straightaway margin on his closest pursuers when Mark took over the runner-up spot by passing Jacobs high in the second corner midway through the race.

Steve re-entered lap traffic with eight laps remaining. But Mark narrowed the gap within three laps. He took a shot at the lead low in the first corner on lap 28, but was turned away.

Two laps later, with the white flag flying, Mark made the winning pass when Steve strayed from the low groove. Following the Kinser cousins across the line were Jacobs, Herrera, and “B” feature winner Danny Lasoski.