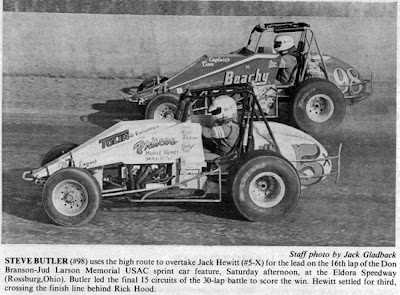 1984 – Steve Butler overtook Jack Hewitt at the midway point and then held off Rick Hood to capture the 30-lap USAC Don Branson/Jud Larson Memorial sprint car race at Eldora Speedway in Rossburg, Ohio, on April 28. Hewitt dominated the early portion of the event before Butler passed him for the lead on lap 16. Hood would pass Hewitt for the second spot and then mount a furious charge on Butler before falling short at the checkers. Hewitt settled for third, while Randy Kinser finished fourth and Tom Bigelow posted a fifth place finish. 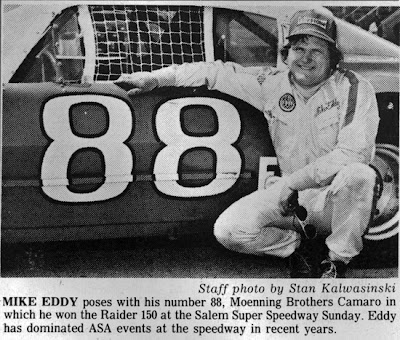 1979 – Mike Eddy of Midland, Mich., continued his domination of American Speed Association events at Salem (Ind.) Speedway winning the Raider 150 on Sunday afternoon, April 29. Eddy took the lead from Rick Knotts of Paw Paw, Mich., on lap 16 then withstood challenges from Mark Martin of Batesville, Ark., and Randy Sweet of Kalamazoo, Mich., to claim the $3,055 first prize. Eddy won by more than a full lap at the finish as the other drivers suffered assorted problems. Sweet was running a strong second when a broken valve sidelined him with 13 laps remaining and Martin was forced to the pits with a punctured tire after running nose to tail with Eddy for 50 laps. 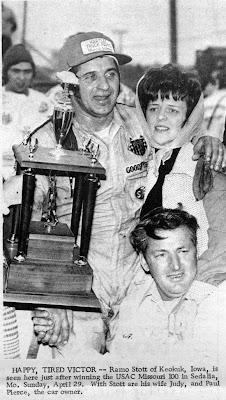 1973 – Ramo Stott of Keokuk, Iowa, won his second USAC stock car race of the weekend, winning the Missouri 100 at the Missouri State Fairgrounds on Sunday afternoon, April 29. Stott had scored a 100-lap USAC stock car victory the night before at the Marion County Fairgrounds in Knoxville, Iowa. Stott passed fellow townsman Ernie Derr with two laps to go on the one-mile dirt oval to claim the $15,000 victory. His winning time was 1 hour, 10 minutes and 44 seconds. The race was dominated by Keokuk drivers as Derr settled for second while Don White placed third. Jack Bowsher of Springfield, Ohio, the fast qualifier of the day (39.17), led the first 57 laps before blowing a head gasket and was unable to return to action. Al Unser of Albuquerque, N.M., completed only two laps before he was forced out with a faulty oil pump. 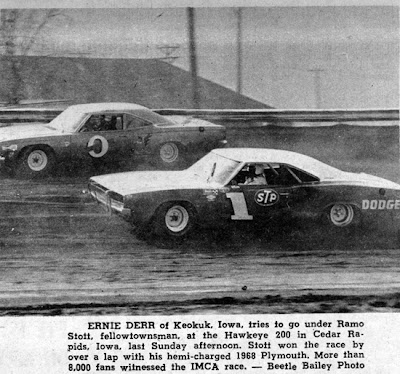 1968 – Ramo Stott of Keokuk, Iowa, shed his oft-worn bridesmaid role to win the annual Hawkeye 200 on Sunday afternoon, April 28. Eight-time IMCA national champion Ernie Derr, the other half of the “Keokuk Komets”, saw his chances for victory fade when he made a lengthy pit stop for fuel. When both drivers pitted for fuel during a caution on lap 97, Stott trailed Derr by 15 seconds. But as Stott shot out of the pits, Derr’s car would stall. By the time a push truck arrived and put Derr in motion, Stott boasted a one-lap advantage. It was said afterwards that one of Derr’s crew members apparently killed the motor when he doused it with too much water in an attempt to cool the radiator. Stott banked $750 for his victory before an estimated crowd of 8,500. Derr settled for second while Lenny Funk of Otis, Kan., took third. Lewis Taylor of Shawnee, Kan., grabbed fourth and promising rookie Fred Horn of Marion, Iowa, rounded out the top five.