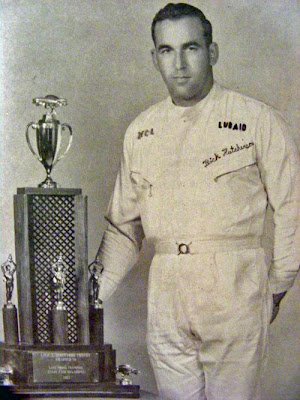 But the man who said, “You can't beat the hours,” was talking about big-league baseball umpires, not stock car drivers.

Dick Hutcherson, one of the Keokuk Komets who won the International Motor Contest Association (IMCA) championship last year, says the biggest single factor in successful stock car driving is putting in long, long hours making certain your machine is ready for each race.

“Almost every day I’m up and at it about 8 a.m.,” said Hutcherson, who was in Cedar Rapids Friday to help beat the drums for the Hawkeye 250 at Hawkeye Downs next Sunday, May 17.

“Unless I’m driving to a race or something else important comes up, I'm working on that car until 10 or 11 at night. A 95-hour work week is not unusual. Often seven days a week, too.”

Another thing; you have to drive a truck carrying your race car long distances. The 56 IMCA races last year were at sites as widely separated as Shreveport, La., and Minot, N. D.

“I put 65,000 miles on my new two-ton Ford truck last year,” Hutcherson said. “On top of that, during the off-season I went to Charlotte, N. C. (to the Holman and Moody plant) to help get my new car ready for this year, and I was at Daytona Beach, Fla., to watch the races and see what new techniques I could pick up.”

The 250-lap race at Hawkeye Downs next Sunday is being billed as a battle between Ford and Plymouth. Hutcherson, Bill Thomas, Ralph Wilhelm and Johnny Jones will be among those piloting Fords.

Ernie Derr, Ramo Stott and Gil Haugan are included in the Plymouth lineup. Derr and Stott, and Hutcherson, are from Keokuk. Derr, five-time IMCA national champion, was dethroned last year by Hutcherson to end a string of four straight annual titles.

Derr got off to a flying start April 19 by winning the IMCA opener, a 100-miler at Shreveport. Stott was second. Hutcherson broke Derr's six-month-old track record for one lap by turning the half-mile in 26.08 seconds in the time trials, but a faulty distributor condenser in the feature forced him to cut speed so he finished third.

We enjoyed our interview with Hutcherson, a handsome 6-1, 195-pound Keokuk native who is 32 years old. Here are some of the interesting points we picked up from him about late model stock car racing; His new car is a Ford Galaxy 500/XL with a piston displacement of 427 inches; He is sponsored by Zecol, the trade name of the Automotive Chemical Co. of Milwaukee.

Hutch says his Ford actually gets only about three miles per gallon (they use Ethyl, not less than 102 octane) during a race. This shouldn’t alarm the average car owner though; because the mechanics drill the jets on the carburetors to make sure the gas never is in short supply. His car has the usual 20-gallon gas tank, which means he probably will have to make two pit stops for gas in next Sunday's 125-mile race. He might make it with one fueling stop, but it could be close, and that’s why you occasionally see some drivers out there frantically pushing their machines across the finish line.

“A lot of stock-car drivers hope to get a chance to drive big cars some day and maybe compete in the Indianapolis 500,” says Hutch, “but not me. I like stock car driving, and right now my number one ambition is to win the IMCA national championship again. Yes, stock car driving is a hard life, but I think a man can continue racing until he’s about 50.”

“You’ve heard it said a race can be won or lost in the pits, and that’s true,” says Hutch. “I’ve got a real good crew. My dad, Leon Hutcherson, is our crew chief, and he organizes everything well. Dad is a house building contractor in Keokuk, but he got interested in racing about the same time (1956). My brother Ron, Bob Petty, Bob Brillon and Sonny Morgan (all of Keokuk) also serve on our pit crew. We don’t have the kind of wheels used by the big cars at Indianapolis; we use stock wheels, but our pit crew has air impacts and they can give me a tire change and a full tank of gas in 20 seconds. When I was racing at Sedalia, Mo., in 1962 I was trailing Ernie Derr by a half lap. We both went into the pits for tire changes, and my crew did so well that I was a half-lap ahead when we got back on the track. I won the race.”

“I’ve been lucky,” says Hutch. “I’ve never been hurt in late model racing, although when I was racing modifieds out of Keokuk I was in a wreck and suffered a cut in my lip that needed seven stitches. I ate soup for a week.”

“This late model racing is not really dangerous, because we have roll bars and excellent equipment. Some people think big crowds come out to races to see accidents, but I believe most fans turn out at late model races to see competition between the types of cars they’re driving themselves.”

Although the name of the racing is STOCK, most racing machines have heavily reinforced front ends and other parts - most of them supplied by the factories.

Hutch says his Ford will weigh about 3,900 pounds, which is approximately what a Ford of that class will weigh when it comes from the factory. The difference is Hutch and his crew will add things like a roll bar and exchange some parts for heavy-duty equipment. Then they’ll remove items like headlights (the holes are covered-with sheet metal), seats, heater, window glass and mechanisms (except windshield and rear window), right-side windshield wiper, bumper braces, door handles - a lot of little things that add up to excess weight.

Hutcherson began racing in 1956 after completing a four-year hitch as an Air Force radar man. He raced modifieds in the Keokuk area, finishing second in his circuit in 1956 and winning in 1957 and ‘58. He bought Derr’s ‘57 Pontiac that won the IMCA national title in 1958 and began driving in the IMCA circuit in 1959. He was second to Derr for the 1959 season championship, third in 1960 and second in both 1961 and ‘62 before winning his first title last year. Hutch’s season record in 1964 showed 31 first places, nine seconds, one third and two fifths. He scored 3,204 points to 2,846 for second-place Ramo Stott.

Hutch likes carrying his racing car around on the back of his truck. “No matter how badly you get smashed up,” he says, “you can always load it on the truck and drive it home to work on it. My truck has an air-conditioned cab. We can take four of us, three in the seat and one lying in the sleeper behind the seat. I got six tickets for speeding last year driving to the races. I want to tell you driving on the roads scares me a lot more than driving on a track, the way some of these motorists drive!”

Hutcherson holds the IMCA world record for one lap of a half-mile dirt track, and he set it at Hawkeye Downs. It is 25.25 seconds. “This Cedar Rapids track is real fast, and one I really like to drive,” says Hutch.

We asked Hutch the most important factor in stock car driving. “Probably experience,” he replies.

“You’ve got to learn to have confidence in your car. Right now, for example, I'm convinced I’ve got the best handling car on the track. If nothing happens, I expect to finish in the top three every time out.”