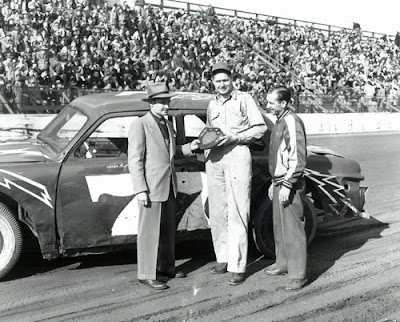 
Blue Island, Ill. (April 5, 1951) - Stock car racing, postponed last Sunday after a week of wet, rainy weather topped with a blanket of snow, will get underway again Sunday at 2 p.m. as more than 50 post-war automobiles take to the Raceway Park quarter-mile track for the second of the afternoon series of races.


The Ford make cars will attempt to even the score with the “Flivver Fighters” in the team race heats. The initial victory in the resume of the team battles was won by the non-Ford family of cars, led by victories scored by Eddie Anderson in a 1951 Nash, and Red Duvall in a 1946 Packard. They outmaneuvered three Mercury’s.

Koehler, who wound up against the steel retaining wall during an Easter Sunday semi-final race, will have his 1949 Ford with the familiar number “77” back in condition for the second of the stock car series Sunday.

Time trials will start at 12:30. Eleven contestants will drive in each of the four heat races, giving the drivers 44 starting spots to seek in the time trials. The 12 fastest cars and drivers will start in the semi-final race and 24 cars and drivers will be eligible for the 25-lap feature race. The slowest 12 cars will start up front in the feature and the first 12 fastest cars will get the pear positions according to the way they finish in the semi-final race.