When the Midgets were Kings of Playland Park 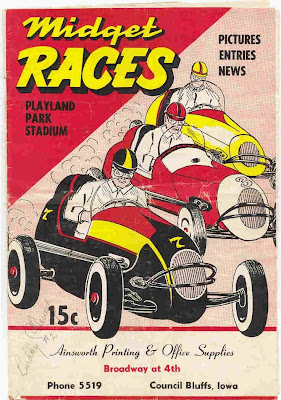 A Playland Park Stadium program cover from the 1949 season. - Courtesy of Lee Ackerman
by Lee Ackerman
Omaha, Neb. - In 1941, they built a dog track near the Missouri River in Council Bluffs, Iowa. “They” were led by the famous gangland czar, Meyer Lansky. It ran three years and was shut down. In 1947, the facility became a dirt track for car racing built by an enterprising gentlemen named Abe Slusky.

There were a lot of changes at the facility the next few years, in 1947 it was called Frontier Park, in 1948 Slusky added an amusement park and midway including a three-quarter mile long roller coaster and the track was renamed “Playland Bowl”.
In 1949 the name was changed again to “Playland Park Stadium. No matter what the name or the changes that was going on around the race track, the Mighty Midgets were the Kings of Playland those first few years.
On June 7, 1947 the midgets made their debut at Playland and Danny Kladis of Chicago, Ill., set quick time at 16.91 seconds and went on to win the first midget feature at the facility. Kladis would win the Mississippi Valley Midget Racing Association Championship three years running from 1946 to 1948. That series would run as many as 70 races in a given year.

Kladis would set quick time in 7 of the 12 official programs at Playland that year and win five features. He also set quick time on July 12, but the balance of the program was rained out. Kladis had strong competition at Playland in 1947 from Red Hoyle, who would also win 5 features that year. The other two features in 1947 were won by Cedar Rapids, Iowa’s Johnny Hobel. Also making an appearance that year were Lloyd Ruby of Wichita Falls, Texas, who would race in many Indy 500’s and have a shot at winning that race a couple of times and Chuck Weyant, who would participant in four Indy 500’s.

In 1948 the midgets ran 21 programs at the quarter-mile facility. The action was dominated by drivers from the Kansas City Area. Both “Blazin Ben” Harleman and George Binnie won four features at Playland that year. Binnie had been the Kansas City Midget Racing Association Champion in 1946 & 1947. Harleman would claim the crown in 1948. 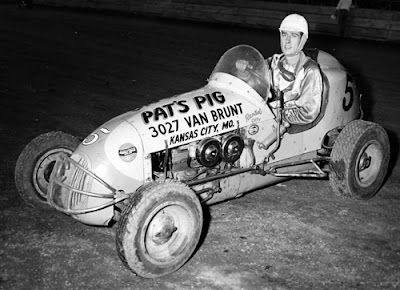 Bob Slater
Another Kansas City driver, Bob Slater won three features and would be the Kansas City Midget Champion in 1951 & 1952 before going on to win the International Motor Contest Association Big Car Championship in 1954. Walt Raines picked up a pair of feature wins. 12 different drivers would visit victory lane in 1948, showing just how competitive the midget racing was at Playland.

In 1949 the action was dominated by Ben Harleman, who would pick up 6 wins of the 20 features contested that year. Wayne Selzer was close behind with four feature wins. Local racers did well with Larry Wheeler picking up three wins and Der Merkley scoring a win for the second year in a row. Hot Rod racing came to Playland that year, but fatalities in two successful nights of Hot Rod racing brought an end to their threat to midget racing as the king.

1950 saw the coming of the Modifieds (coupes and sedans) to Playland and the midgets would run just seven races at Playland that year. Bob Slater would dominate the action winning four features that year with the other features going to Vito Calia, a many times Kansas City Midget Racing Association Champion, Wayne Selzer and Buddy Cheney.
New names continued to show up at Playland in 1950 including Mac McHenry, who would win the 1950 Kansas City Midget Championship and Eddie McVay, also of Kansas City. The name McVay would be associated with midget racing for years to come.

The midgets would run a limited schedule at Playland in 1951 and again in 1953 before fading from the scene as the popularity of midget racing began to fade across the country. Bob Slater and Vito Calia, a pair of Kansas City aces would dominate the action in 1951. 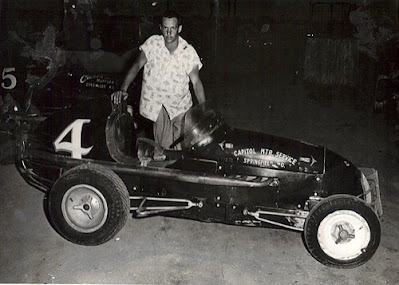 Bobby Parker
Another new name would start appearing in 1951 at Playland in the midget races and that was Bob Parker of Harlan, Iowa. Parker would go on to have a storied career in both midgets and modifieds and would be inducted into the Nebraska Auto Racing Hall of Fame in 2000.In 1953, two midget races were run at Playland with wins picked up by Mac McHenry and Wayne Selzer.

Two drivers who would go on to run at the Indy 500 and become open wheel legends would compete at the July 4, 1953 midget races at Playland. Jud Larson, the racing legend from Kansas City and Don Branson, the smooth chauffeur from Champaign, Illinois both won heat races that day with Branson taking second to McHenry in the feature.
Midget racing would fade from the scene at Playland Park, ironically appearing there for the last time on July 5, 1975, many years after the track had been asphalted. A handful of drivers showed up to run the last midget race at Playland. Randy Northway of Cedar Rapids, Iowa won the 20-lap feature.

Playland Park was demolished in 1978 and is now a soccer field, but the memory of the mighty midgets running their will long be remembered.