Curt Martin
2004 - Curt Martin made the Buchanan County Fair extra special by picking up his 100th career IMCA late model feature win of his career at Independence Motor Speedway on July 10. Martin passed race leader Les Verly early in the 25-lap contest and then held off Darin Duffy in the closing laps to seal the victory.
1995 - Rick Aukland of Fargo, N.D., won the 40-lap Miller Genuine Draft Summer Nationals at West Liberty Raceway on July 10. Fast timer Ray Guss Jr. grabbed the lead but was overtaken by Greenbriar, Ark.'s Billy Frye on lap 10. Frye was passed 10 laps later by Billy Moyer Jr. of Batesville, Ark., until Aukland sped past Moyer for the lead on lap 32 and went on to score the $5,000 win.
1989 - Billy Moyer Jr. of Batesville, Ark., drove to an overpowering victory in the 10th Annual NAPA Gopher 50 at the Steele County Fairgrounds in Owatonna, Minn., on July 11. Moyer passed early race leader Steve Kosiski of Omaha, Neb., on lap 21, worked lapped traffic to perfection and won by 10 car lengths at the checkers. Steve Kosiski, John Gill of Brownstown, Ind., Ray Guss Jr. of Milan, Ill., and Joe Kosiski of Omaha were the top five finishers. 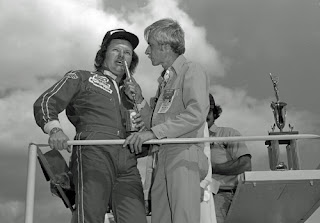 Dave Watson of Milton, Wis., is interviewed by Jack Baker after winning the Miller 200 at the Milwaukee Mile. - Stan Kalwasinski Collection

1977 - Dave Watson of Milton, Wis., made his first appearance with the USAC stock cars pay off as he drove his 1977 Buick Skylark to victory in the prestigious Miller 200 at State Fair Park near Milwaukee on July 10th. Watson came from a lap down early in the contest to pass NASCAR star Bobby Allison of Hueytown, Ala., driving a 1977 AMC Hornet, on lap 158 for the lead and won by seven seconds. Allison settled for runner-up honors with Don White, Bay Darnell and Harold Fair rounding out the top-five finishers.