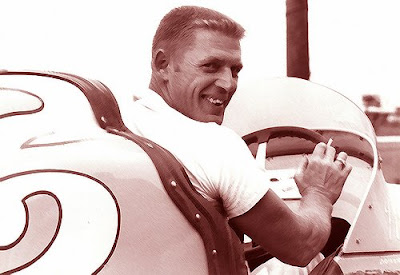 Jud Larson, shown here when he piloted the A.J. Watson sprinter to many victories, was a hard-drinking, hard-driving racer, a colorful character from the days when few drivers survived to retire, and roll cages were for sissies.
On July 23, 1965, the legendary Jud Larson won the 30-lap USAC sprint car race at Lakeside Speedway in Kansas City? Averaging 70.88 miles per hour, Larson toured the half-mile in 12 minutes, 40 seconds.
Jerry Daniels, Carl Williams, Roger McCluskey and Don Branson were the top-five finishers. Two other drivers who didn't fare as well that day but would go on to experience quite a bit of success in their careers; Texan Johnny Rutherford would finish 14th and hometown hero Greg Weld would settle for 17th.