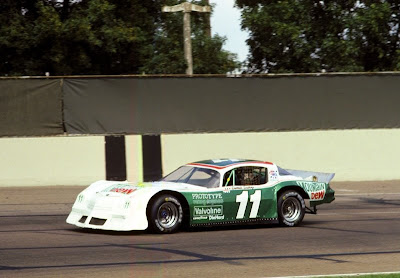 Darrell Waltrip of Franklin, Tenn., made his weekend trip north pay off as he won the overall title of the two-track, two-day NGK Spark Plug Summer Nationals.
Wisconsin Dells & West Salem, Wis. - It's not uncommon to see some of today's NASCAR stars make appearances at short tracks across the United States when time allows for it. Kyle Busch, Matt Kenseth and Tony Stewart are some of the top stars that have raced this season on the asphalts of Wisconsin.

Twenty-nine years ago this week, another familiar name made an appearance at two of the cheese state's most historic tracks for the ARTGO-sanctioned 4th Annual NGK Spark Plug Summer Nationals. One of the hottest drivers on the Winston Cup circuit that season was Darrell Waltrip of Franklin, Tenn. While he was dominating the big tracks in the south, he figured it was time to test his driving ability against the best of Midwest. One problem, though, Waltrip didn't have a short-track car ready to race. "No problem," said Mark Martin, "You can borrow mine. I'll even lend you, my crew.". Problem solved...

Trickle, the ARTGO point's leader and two-time series champ, drove his infamous 1980 Superamerica Camaro to his eighth and ninth victories of the season. In the first main, Trickle outlasted Jim Sauter by a decisive 3.21 seconds. Joe Shear, Butch Miller, Larry Detjens, Mike Miller followed with Waltrip finishing seventh despite new surroundings and a car he was still trying to get used to.

In the second 75 lapper, Trickle proved that he got stronger as the day got longer winning the night-cap by a whopping 4.49 seconds over Shear, Detjens, Bob Senneker, Sauter, Tom Reffner and a fast-moving Waltrip who duplicated his feat of the first race by finishing seventh again. Trickle also bested a field of 44 late models in qualifying, turning in a time of 13.898 seconds.

On a side note, a young man by the name of Steve Carlson from La Crosse, Wis., wheeled his '78 Camaro to victory in the 15-lap hobby stock feature that same evening. Kevin Nuttleman won the semi-feature.

The next night, Sunday, July 20, the event moved to La Crosse Interstate Speedway for the finale that included a 200-lap feature event. Waltrip, driving the Dillon Enterprises Camaro of Martin's, started the afternoon's program by shattering the track qualifying record on the 5/8-mile oval with a time of 19.393 seconds, erasing of all people, Mark Martin's time of 19.480 seconds accomplished only a month ago in the very same car.

A field of 25 cars started the feature, which saw seven cautions and a hour and a half rain delay slow the action. One of the cautions was caused by Steve Holzhausen's Ford Fairmont erupting into flames at lap 130 after his engine blew. Tom Jones, Joe Shear, Larry Detjens, Dave Watson, Jim Sauter and finally Waltrip all led at one point or another.

Right after the halfway break, Waltrip grabbed the top spot from Sauter on lap 106 and was never headed after that. Trickle, the double winner the night before, nipped at Waltrip's heels as the race approached it's closing stages, but Dick had to pit under green flag conditions on lap 169 with a flat rear tire. With Trickle out of the picture, Waltrip finished in dominant style, with a 8.24 second lead at the checkers over Shear, Senneker, Watson, Sauter, Trickle, Steve Burgess, J.J. Smith, Jay Sauter and Dennis Vogel.

Waltrip's first career ARTGO victory clinched the overall title for him. Then it was time to head south to dominate another track.