1998 - Jimmy Gustin of Union, Iowa and Scott Davis of Madrid, Iowa were the big winners at Greenbelt Speedway in Eldora, Iowa on July 23. Gustin rode the high side around the 1/2-mile to win the National Kidney Foundation of Iowa's Heartland Tour for modifieds and Davis passed Jeff Nielsen with four laps to go to score the win in the NAPA Series for IMCA stock cars.
1987 - Roger Dolan of Lisbon, Iowa battled much of the race with Dale Fischlein of Independence, Iowa for second place, then chased down race leader Bob Hill of Story City, Iowa, to win the 50-lap NASCAR Busch All Star Tour event at Fairmont (Minn.) Raceway on July 24. Dolan, who started eighth, passed Hill on lap 34 and then held him off for the remainder of the race in front of approximately 3,000 fans on the Martin County Fairgrounds. 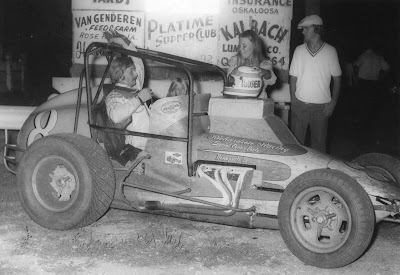 Roger Rager acknowledges the crowd from victory lane after winning the super sprint feature at the Southern Iowa Fairgrounds in Oskaloosa, Iowa on July 25, 1975.
1975 - Roger Rager of Mound, Minn., grabbed two super sprint wins in two days. On Wednesday night, July 23, Rager swept the the program, winning his heat, trophy dash and feature at Fairmount Speedway in dominating fashion. On Friday, July 25th, Rager set fast ime (21.300) on the Southern Iowa Fairgrounds 1/2-mile and then battled side-by-side with Leonard McCarl until securing the lead for himself on lap 15 of the 20-lap contest. 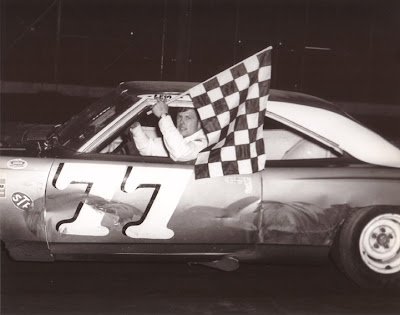 1969 - Lem Blankenship of Keokuk, Iowa withstood the challenges of 17 of the best drivers in the Midwest to win the Centennial 100 stock car race at Shelby County Speedway in Harlan, Iowa, on July 25. Blankenship led the race for 95 laps. picking up a total prize of $495 for his efforts. A crowd of 3,306 saw Blankenship hold off George Barton of Ankeny and hometown driver Don Christensen for much of the race. Milo Stodola of Fremont, Neb., finished fourth and the "Flying Tiger" Red Rollins snared the fifth spot.