1987 - Bobby Layne showed why he was the national weekly racing series point's leader in the IMCA modified division by leading all 25 laps in winning the 4th Annual Modified Madness Special at Lakeside Speedway on July 31. The 33-year-old driver from Pleasant Valley, Mo., started in the inside second row but had the lead before the first lap was completed. 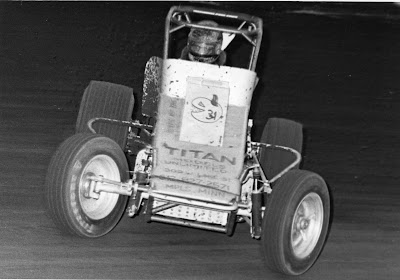 1974 - John Stevenson took advantage of a late yellow flag to score the victory in the 20-lap Midwest Sprint Association feature at Bemidji (Minn.) Raceway on July 31. Stevenson, driving the Bethke Sprinter, moved past race leader Bob Hop on the last restart and won by a couple of car lengths at the checkers. Hop, Barry Kettering, Harry Johnson and Dennis Olson finished out the top five.
1969 - Darl Harrison of Tiffin, Ohio, fattened his IMCA championship point's lead by winning the 25-lap feature on the half-mile of the Knox County (Ill.) Fairgrounds before 3,700 race fans. Following Harrison across the finish line were Benny Rapp of Toledo, Ohio, Jerry Blundy of Galesburg, Ill., Jay Woodside of Kansas City and Buzz Rose of Lomita, Calif.