Move over baseball; the midgets come to the Astrodome 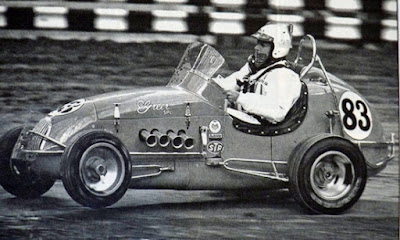 A.J. Foyt won the 100-lap feature for the USAC midgets at the Astrodome.

by Kyle Ealy
Houston, Tex. - Former Chicago Cubs player and then color analyst Mark Grace was calling a National League play-off game in the Astrodome in Houston, Tex. and he made a statement that will forever be etched in my memory. “Look at this; a National League play-off game and the place isn’t even full,” he remarked. “But get a tractor/truck pull, a race or a rodeo in here and they pack the place.”

I had to look back to see when, if ever, there was an auto race there. Sure enough, Gracie knew his Astrodome history. The first race was held in 1969, a USAC midget doubleheader on March 8th and 9th. Gary Bettenhausen and local Iowa hero Lee Kunzman split the winnings in the inaugural USAC Midget Astro Grand Prix.

However, it was the 1970 event that stood out. The second annual event, before a crowd of 21,432 race fans, turned into one of the wildest races in midget history, as the drivers started cutting into the infield, one by one, until all but one driver was running well inside of the planned ¼-mile track. By the time USAC officials regained control of the race, by stopping it on the 66th lap, the pole of the track had moved a measured 54 feet into the infield and the outside of the track was the pole of the planned oval.

Twenty-six cars took Shim Malone’s green flag for the start of the $25,000 race but before the field even took the green, the large field tangled on the backstretch during the four-abreast parade lap with 10 cars ending up either stalled, spun out or sitting on top of one another. Only Johnny Rutherford’s mount was unable to restart and Lloyd Ruby’s midget had dropped out on the pace lap with a broken rear suspension. No one was injured despite the fact that Jim McElreath had a car practically sitting in his lap.

On the drop of the green Dave Strickland took the lead with Billy Vukovich in tow. The star of the early laps was Bruce Walkup, who forged from his 13th starting position to find his way to the third spot by lap five. He surged past Vukovich a lap later and then dove under Strickland for the lead.

While the fans were watching Walkup take command of the top spot, Houston's native son A.J. Foyt was also on the move, taking third from Vukovich and then sliding past Strickland on lap 19. By the 25th marker Walkup maintained a small distance over Foyt.

By this time, the field of midgets was cutting the infield badly, throwing the tires that were sunken into the ground as pole markers on the track. Officials threw the yellow at lap 52 to try and regain some control of the race but it was to no avail and the green waved again on lap 55. Vukovich, chopping farther and farther into the infield, sped past both Foyt and Walkup on lap 57 to take the lead with Foyt following past Walkup.

On lap 59, Foyt managed his way past Vukovich for the lead but Billy wasn’t having any of that and banged his way back into the lead on the very next lap. The yellow came out on lap 64 with the red flying just two laps later to discuss the ever-shifting track.

USAC officials and drivers huddled while fans waited as USAC midget supervisor Bob Stroud ruled that any driver cutting the infield would be disqualified. After a half-hour timeout, the race finally restarted.

On the restart, Foyt once again claimed the top spot with Vukovich and Walkup following. Walkup passed Vukovich for the runner-up spot on lap 69 and set out after Foyt. On lap 78 Vukovich got the black flag by USAC officials for cutting into the infield and he and car owner Leonard Faas jumped all over officials at the start-finish line with Vukovich eventually packing up his helmet and leaving the Astrodome.

While Faas was still arguing, his other car, driven by Walkup, was bumped by Sam Sessions, who he was lapping, and bounced into the front stretch crash wall head first. Walkup was uninjured but finished for the night.

On the ensuing green, Foyt would again take the lead, a lead he wouldn’t relinquish all the way to the checkers. Driving his Green Offy Special owned by Marc Edwards, it was yet another rung added to his long victory ladder. The triumph was worth $5, 475 in money and prizes.

Former USAC Midget National champ Bob Wente would take runner-up honors in the Knepper Offy while the third spot was taken by Bill Puterbaugh in the King O’Lawn Special. Fourth spot went to Hank Butcher in the Johnson Offy and rounding out the top-five was defending national champion Bob Tattersall in the Stroud Offy.

Racing at the 8th Wonder of the World was short-lived. Almost three years to the day (March 11, 1972) the last race was run there, a 100-lap affair with Gary Bettenhausen winning once again.