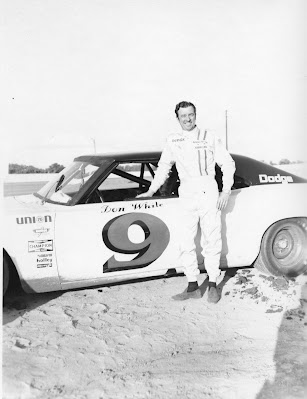 Cedar Rapids, Iowa - All through the 1960’s Don White of Keokuk, Iowa, ranked among the finest stock car drivers in the country.

White was as dominant as driver was on the USAC stock circuit in the 1960’s, winning titles in 1963 and 1967 and finishing in the top-three in points in most other years.

One of White’s favorite tracks on the USAC circuit was the Milwaukee Mile. Starting in 1960, it wasn’t unusual to see White’s smiling face in victory lane. Between 1966 and 1970, White dominated the competition there winning three times in 1966 and twice in 1968, ‘69 and ’70.

White didn’t know it at the time but his 150-mile victory at the “Mile” on August 16, 1970, would be his last for a while. For most of those successful years, White piloted a car built and owned by the legendary Ray Nichels.

In 1971, White decided to strike out on his own and discovered it wasn’t as easy as an owner/driver. White struggled mightily the whole season and instead of the usual wins and top-five’s that he was accustomed to he was having trouble finishing in the top-10 and sometimes not even finishing at all.

A month long stretch during the dog days of July and August got even hotter with finishes of 29th, 36th, 19th, 31st and 18th. White’s first year of being an owner/operator wasn’t anything to write home about. For the first time since 1965, Don White didn’t win at Milwaukee.

He was determined to see it through…

The 1972 season started with optimism and after a 100-lap victory at the Mississippi Valley Fairgrounds in Davenport, Iowa on May 27 and another victory at the Springfield (Ill.) Mile on July 4th, he seemed to be building up steam.

White took that momentum into Milwaukee on July 9th for the “Miller Lite 200”. Starting on the outside second row, White ran a solid race for 200 laps eventually finishing where he started behind eventual winner Roger McCluskey, Jack Bowsher and fellow Keokuk Komet Ramo Stott.

A little over a month later, again in Milwaukee on August 20th, White qualified fifth, made his way to the front and actually led 15 laps before dropping out on lap 143 of the 200-lap affair with a broken water pump. He finished a disappointing 25th. A week later at the Indiana State Fairgrounds, White qualified 8th only to be taken out in an accident on lap 64. He would finish 21st.

With only two races left on the ’72 USAC tour, White was eager to finish out what had been an up and down season on a positive note. The September 10th race at Milwaukee, the “Governor’s Cup 250” the site of many triumphs, was White’s last chance.

On what turned out to be a cloudy day with intermittent rains, White, driving his 1970 Dodge Charger, put himself in great position qualifying in 6th position. Albuquerque, New Mexico’s Bobby Unser set fast time and a new track record for the event at 33.074 seconds (108.847 mph) in his 1970 Plymouth Superbird.

Unser had fared quite well on the USAC circuit this season and he bolted to the lead at the drop of the green flag. His afternoon would come to a close quite quickly however as a connecting rod in his Hemi broke only eight laps into the affair.

Jack Bowsher, who had started on the outside front row opposite Unser took charge with Roger McCluskey (started 3rd) and White right on his tail. Those three would exchange the number one position through the early going and two yellow flags for oil until the first yellow for a light rain came out on lap 95.

After five damp laps, the field resumed speed with USAC point’s leader Butch Hartman and Bowsher’s Ford teammate Whitey Gerken, enjoying the advantage. By lap 123, rain began to fall again and 10 more laps were lost before the track was dried.

Bowsher assumed the point on the lap 133 restart and would proceed to lead for the longest period of the race, 49 laps, until he made his fourth pit stop. Hartman’s 1972 Charger was the next to lead but when he pitted for fuel, it was “Mr. Milwaukee” Don White, who was running a close second, that inherited the lead on lap 213.

Fifteen laps later, rain began to fall again and from then on it became academic. Gordon Johncock was just two-car lengths behind White when the green finally came out after 247 of the scheduled 250-lapper, but he was unable to overtake the veteran of 49 career USAC stock car victories.

Due to the rain and numerous yellow flags, White’s average speed was 84.784 mph. White was the victor in a see-saw battle between seven drivers and Mother Nature to collect $6,968 in winnings.

But more importantly for White, it was a victory that proved his worth as a car owner and builder.