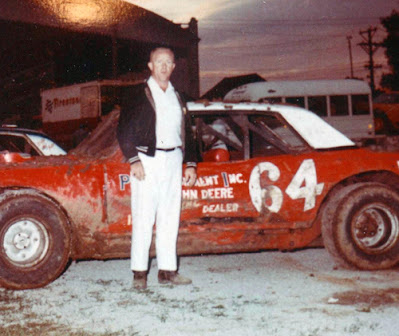 Red Droste
by Kyle Ealy
Cedar Rapids, Iowa - Nothing beats the opening weekend of racing here in the Midwest. After a long winter, the roar of the motors, the new paint jobs, the smells coming from the concessions and the buzz amongst the fans in the stands send chills through a person's body. Whether you're a driver or race fan, it is as anticipated as opening day in baseball, the first kick-off in football or the opening tip in basketball.

The 1969 race season got off to a rolling start with some Midwestern racing legends taking opening weekend victories.

Probably the biggest of the openers was the Saturday night affair at the Benton County Fairgrounds in Vinton, Iowa. "The Old Master" Red Droste showed why he was the best short track driver around, wheeling his 1968 Chevelle to victory three times on the evening before a freezing but near capacity crowd at the quarter-mile. Droste banked $200 for the feature win and additional $50 for setting fast time. The redhead gave the fans a sneak preview of things to come for the season by setting fast time on the quarter at 17.73 seconds.

Several area drivers were unable to make it because they didn't have their cars ready. Chub Liebe of Oelwein, Bill McDonough of Cedar Rapids, Bill Zwanziger of Waterloo and Cal Swanson of Reinbeck were there but sat in the stands. 1968 Davenport and East Moline champ Ron Weedon of Pleasant Valley was unable to attend because of flood waters back home.

The night wasn't without it star power however. Young Curt Hansen of Dike challenged the master in time trials and grabbed the second spot with a clocking of 17.90 seconds. He was a strong contender in the feature before dropping out with mechanical problems later.

Del Stokke of Ames. driving a 1957 Chevy, took an early lead in the feature, holding Droste, Waterloo's Ed Sanger and Rhode's Danny Clement at bay for the first nine laps before "Fast Eddie" slid around Stokke and took the point. Sanger maneuvered his Chevelle in front of Droste for the next eight laps before the master roared into the lead. The redhead took it from there driving a beautiful race to the stripe.

Droste picked up the checkers with Sanger second, Clement third, Monticello's Tom Hughes, an Eastern Iowa favorite, in fourth and Dale DeFrance in fifth. Stokke, Lisbon's Bill Beckman (in a '57 Chevy convertible) and Dave Noble, making the trip all the way from Blooming Prairie, Minn., rounded out the top-eight finishers. 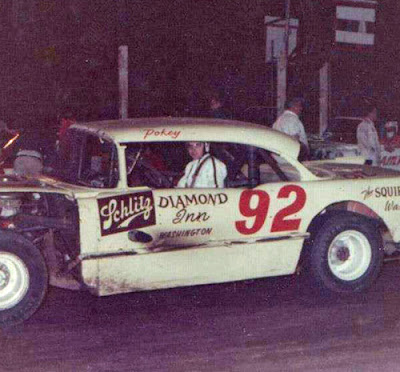 Ron Prymek of Iowa City (25.94) and Mel Morris (26.20) turned in the next fastest times on the 1/2-mile oval. John Moss of Iowa City won the first trophy dash of the new season. In addition to West's heat win, Mike Niffenegger of Kalona, Moss and Wahle Brown of Rock Island also picked up victories. Bill Hopp of Muscatine was top dog in the semi-main. Other notables in attendance were Ron Hemsted of Lone Tree, Bob Helm of Rochester, Perry Beckler of Tiffin and Steve Fraise of Mt. Rose.

Sunday night's action brought a familiar face to victory lane. Defending champion Ron Weedon of Pleasant Valley, Iowa picked up where he had left off in the 1968 season, picking up the checkers in the modified feature. Like Droste and West, Weedon made it a clean sweep as well, taking fast time, the first heat and the main event. Ernie Speth, Lyle Behne, Lloyd Ewing and Jack Bailey were the top-five finishers.

Another weekend season-opening winner of note was Indianola, Iowa's Virgil Webb, who grabbed the winner's share of the purse at Stuart Speedway on Saturday night. Webb, driving a '57 Chevy, beat out Panora, Iowa's Larry Embrey (the first heat and Australian Pursuit winner), Joe Merryfield, Bill Geil and Dick Gustin, all of Des Moines. Bill Davis, also running out of the capital city, took the consolation win.