Frank Winkley: A Promoter in the Fast Lane 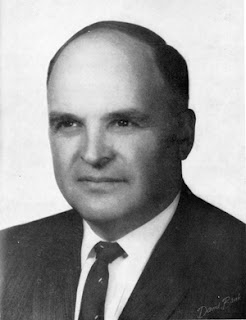 In the glory days of the old IMCA, for many years just about all the IMCA sanctioned events were promoted by one of two groups, National Speedways, Inc., under the direction of Al Sweeney, and Auto Racing, Inc. headed by Frank Winkley. The two were constantly at war with each other, guarding their contracted drivers with a jealous hand. One example was Emory Collins. Collins drove for NSI prior to World War II, but after the war Collins signed with ARI because, as Collins, put it, “part of the agreement included a percentage of the front gate receipts.”

In 1958, Bobby Grim was headed to a Winkley-promoted event. In order to stop him, Sweeney actually paid “his driver” first place money not to go. Despite their constant warring, the two helped make the IMCA one of the premier sanctioning bodies in the world. Both men were inducted into the IMCA Hall of Fame in 1971. Al Sweeney was inducted into the National Sprint Car Hall of Fame in 1991, Frank Winkley in 1993.

In 1949, the IMCA started to sanction Stock Car races. They would continue to sanction these races (which would evolve into late models in the 70’s) until the end of the original IMCA at the end of the 1977 racing season. During this period, Frank Winkley would become an innovator in stock car racing.

Frank R. Winkley was born in 1907, and learned about promoting races in 1925 from driver-turned-thrillcade-operator Aut Swenson, who like Al Sweeney was a protégé of legendary promoter J. Alex Sloan. Winkley, or “Wink” as he was known, would promote 50 to 75 (Big Car and/or Stock Car events) annually for IMCA. Wink was a complex individual; on the one hand he enjoyed reading and quoting the classics, on the other hand, he was a wide-open, hell-bent-for-leather individual, who enjoyed life to the fullest. Don Riley once said of Wink, “He was completely honorable, and completely without fear.”

Wink would be the first to tell you that it was a team effort that made his Auto Racing, Inc (ARI) organization run smoothly. First and foremost, that team was headed by his wife Verna. The 1957 IMCA Yearbook says of Verna Winkley, “The real power behind the throne of ARI is pert Verna Winkley. Widely known as one of the best, if not the best scorekeepers in the racing business, Verna Winkley traveled over 50,000 miles a year helping husband, Frank in the management of ARI. It was not uncommon for her to manage one ARI show, while Frank was off managing another on the same date. In addition, she was a seamstress, making her own clothes, designing the uniforms worn by ARI personnel, and even turned out complete flag sets for the officials to use during the races.”

Others on the ARI team included, Milan “Jake” Bozony of Minneapolis, who was considered one of the most colorful and efficient starters in the business. Nick Nachicas, also lived in Minneapolis and the “Gregarious Greek” worked in various capacities at ARI. Starting with billposting (that was a major advertising technique at the time) to track preparation, before graduating to promotion, publicity work and later announcer.

As ARI was headquartered in the Minneapolis/St. Paul area, most of the events they managed and promoted were in the Northern part of the United States. The biggest of these would be the annual Minnesota State Fair in St. Paul, but also included Hawkeye Downs in Cedar Rapids, Grand Forks State Fair, the North Dakota State Fair in Minot, the Interstate Fair in LaCrosse, Wisconsin, the Steele County Fair in Owatonna, Minnesota, the South Dakota Fair in Huron and the Red River Fair in Fargo.

On September 30, 1956, Winkley took the split feature concept to a higher level, when he staged the Gopher 500 at the Minnesota State Fairgrounds. It would be 2-two hundred fifty lap features. 42 cars would take time trials to determine the 33 cars that would start the race. A crowd of 28,312 fans showed up at the fairgrounds to watch this historic event. The race itself would have three winners. Johnny Beauchamp (who won an incredible 43 IMCA features in 1956) set fast time and then went on to set several track records in winning the first 250 mile segment. In the second 250 laps, it was NASCAR invader Marvin Panch taking home the win. Beauchamp looked like a sure overall winner, but while running second to Panch he retired from the second segment with a blown piston. Don White with a fifth and a third was the overall winner.

In 1957, Winkley pleased with the success of the Gopher 500 staged another 500 lap race. On September 29, he held the Hawkeye 500 at Hawkeye Downs in Cedar Rapids. This race however, was 500 continuous laps. Johnny Beauchamp claimed the pole in the Dale Swanson #55 Chevy and led 33 cars to the green flag. The race saw 13 lead changes and lasted 4 hours 26 minutes and 55 seconds but at the end it was Beauchamp in victory lane.

In 1967, Winkley started promoting races at the Twin City Speedway and Hawkeye Downs as a “feeder circuit” to IMCA. But the gypsy in him could not stay in one place long enough, he needed the open road and a souped-up car.

Winkley once said, “I have only one prayer. That when I go, I don’t go in bed. I want to be behind the wheel of a fast moving car. That’s how I’ve lived.” Wink would get his wish. In late July of 1968, Wink lost his life, when his souped-up convertible went out of control on a highway, enroute to one of his far off races.

His wife Verna would continue the promoting business for one more year under the name of International Racing, Inc.

Frank Winkley lived his life, and lost his life in the fast lane, but he left his indelible and long lasting mark on auto racing.

I would like to thank Tom Schmeh and the National Sprint Car Hall of Fame for letting me use materials from their bio on Frank Winkley.