Fleck Sales and a charity race that became the Miller 100 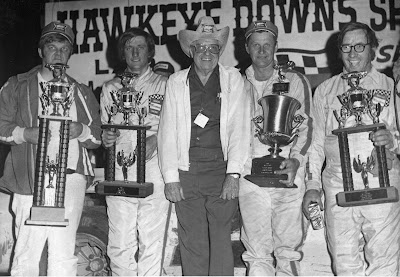 by Lee Ackerman
Cedar Rapids, Iowa - In 1973, Keith Fleck decided to have Fleck Sales sponsor a race at Hawkeye Downs in Cedar Rapids that would raise money for a charity. The race would be a way of getting his brand name (Falstaff) out in front of the public. This would lead to a tradition that still goes on today. That first event was a United States Auto Club sanctioned 100-lap event stock car race called the Falstaff 100. The event would carry the name Falstaff 100 for several years before switching to the Miller 100, a name the race still carries.


The inaugural Falstaff 100 was held on September 29, 1973 (after a number of rainouts) and saw the legendary Butch Hartman of South Zanesville, Ohio drive the Hartman’s White and Autocar Dodge to the victory. That victory would help propel Hartman to a third straight USAC national championship.
The event lasted 44 minutes and 19 seconds and paid a total purse of $13,650. Ramo Stott set on the pole with a lap of 26.43 seconds. At the end of 100 laps only three cars remained on the lead lap, Hartman, and Keokuk, Iowa drivers, runner-up Ernie Derr and polesitter Stott.

In the following years the event would be a dirt late model event. Winners over the years included Bill Zwanziger in 1974, Ed Sanger in 1975, Curt Hansen in 1976 and Fred Horn in 1977. In 1978 they would run the sixth version of the race and the last one that would be called the “Falstaff 100”.

Bill Beckman of Lisbon would set fast time at 24.299 seconds and qualifying in the number two spot was the blue #9 of Curt Hansen. Joe Merryfield of Des Moines would win the dash with heats going to Denny Miller of Cedar Rapids, Stan Stover of Reinbeck, Ed Sanger of Waterloo and Verlin Eaker of Mechanicsville. Stover would take the 20-lap consolation event defeating Davenport’s Gary Webb.

The race itself turned out to be a little anticlimactic as Hansen grabbed the lead on the first lap and held the lead for the entire 100 laps. With Hansen solidly out front, the action turned to the battle for second and that went down to the wire with Council Bluffs’ Bill Martin passing Gary Crawford of Independence on the last lap to finish second. Crawford, Freddie Horn and Roger Dolan would round out the top five.

On June 5, 1979 the seventh edition of the race took place but under a new name. It was still a Fleck Sales sponsored charity event but the title beer had been changed from Falstaff to Miller, the name the event still carries to this day. Over 60 late models signed in time trials. When everybody had run through the clock over 30 cars were within a second of the leader. Defending race winner Curt Hansen of Dike set the fast time at 24 seconds flat followed by Mike Niffenegger, Leon Plank and John Connolly.

The Miller 100 would start straight-up based on time with Hansen on the pole, flanked by Niffenegger, Plank and Connolly in the second row with Grand Island, Nebraska’s Clayton Petersen, Jr. and Mechanicsville’s Verlin Eaker in row three.

At the drop of the green, Mike Niffenegger grabbed the lead from his outside pole starting position. Polesitter Hansen would fade from the start and the man on the move would be 1978 Yankee Dirt Classic winner Verlin Eaker. Eaker grabbed the lead from Niffenegger on lap 42 only to give it back for the next three circuits. After that it was all Eaker as he regained the lead and never gave it up. Leon Plank also ran a strong race for a while before following off the pace and finishing sixth.

The race was run relatively caution free, with some controversy caused after Ed Sanger spun on lap 91. Sanger was allowed to restart in third and in the end, it was decided that both Sanger and Don Hoffman would be paid third place money. The order at the end of 100 laps was Eaker, Niffenegger, Sanger, Hoffman, Hearst, Walton and Plank.

The big winner of the 1979 Fleck promotion was the American Diabetes Association, Iowa Chapter. Each year the proceeds of the event would go to a different charity and the 1979 race would bring the total proceeds given to charity since its inception at almost $50,000.

In 1980, one of the best dirt late model drivers in the country showed up for the eighth running of the Miller 100. Rodney Combs fresh off a win in Davenport two nights earlier decided to try and take some more cash back to West Virginia. An estimated 6,000 fans were on hand for the event. 51 cars took time with Winona, Minnesota’s Lance Matthees setting quick time at 23.475 seconds. Combs, was right behind at 23.545 seconds followed closely by Dick Schiltz, Tom Hearst, Leon Plank and Roger Dolan. The 28 fastest would go to the Miller 100.

Feature time would prove interesting. It was one of those races that seemed like it would never get going and after it did, went off very smoothly. Before they could get a lap in, there was a big pileup which eliminated defending race champion Verlin Eaker of Mechanicsville and Dan Dickey of Packwood. Restart number 1 got a lap in before another wreck would eliminate Larry Wasserfort of Cedar Falls. Restart number 2, still with only 1 lap in the books would see Mike Niffenegger of nearby Kalona eliminated from the action.

After they got the bugs worked out, the feature turned into an almost green-white- checker affair. Tom Hearst grabbed the lead from the outside pole with Matthees second. By lap 20, Combs had gotten around, first Matthees and then Hearst for the lead. Combs would end up stretching his lead to nearly a half lap over Hearst and later Schiltz before late race yellows tightened the field. It really didn’t matter though, as Combs would race off to a straight-away win over Hearst. Following Hearst were Don Hoffman, Dick Schiltz, Denny Osborn, those five being the only cars on the lead lap. For the second time in two days the Rocket had bagged a win in Iowa.

The tradition of the charity race at Hawkeye Downs still exists to this day with the annual running of the Miller 100 now on a paved Hawkeye Downs. According to Fleck Sales President Dudley Fleck nearly $300,000 has been contributed to various charities over the years. In addition to providing funds to many deserving charities, the annual event has provided many hours of thrills and excitement to race fans.