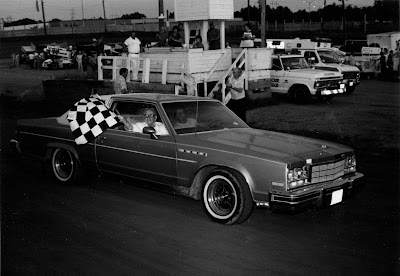 Joe Shaheen waves the checkers for the final time at Springfield Speedway in 1987. At Shaheen’s funeral in 1989, the cortege made a final lap around the quarter-mile before heading to the cemetery, as Joe had requested.
1999 - Freddy Smith outdueled Ronnie Johnson and 60 of the best late models in the country and went on to win the Mountain Dew/Spring Thaw 100 at the new Volunteer Speedway in Bulls Gap, Tenn., on March 6th. With the win, Smith takes the lead in the Big Johnson Late Model National Championship points standings in which he finished sixth in 1998.

1989 - The racing community mourned the deaths of two promoters in the Midwest. Former Marshalltown Speedway promoter Cliff Chambers passed away on March 1st after battling cancer. He was only 49 years old. To this day, the season championship at Marshalltown is named the Cliff Chambers Memorial in his honor.

1989 - Racing pioneer Joe Shaheen, who owned and operated Springfield (Ill.) Speedway passed away on March 15th at the age of 84. Shaheen purchased a dairy farm east of Springfield, carved out a track and began his promotion in 1947 and continued until failing health forced him to close the track in 1987.

1984 - In a surprise announcement, Rockford Speedway President Hugh Deery made it official that the quarter-mile facility would be sanctioned by NASCAR during the 1984 season. The NASCAR flag still waves at Rockford to this day. "This is the biggest news for Rockford Speedway in 25 years," stated Deery. "We are proud to welcome NASCAR to Northern Illinois and we are confident the Winston Racing Series will bring even greater national attention to Rockford Speedway".