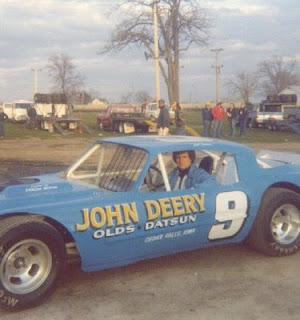 
by Kyle Ealy
Cedar Rapids, Iowa - In the summer of 1978, every time Curt Hansen unloaded his familiar blue #9 Chevy Camaro, chances were pretty good that he was going home with the lion's share of the purse that evening.

The Dike, Iowa, speedster raced regularly at four tracks during the '78 campaign. He started with Oskaloosa on Wednesdays, then Cedar Rapids on Friday, over to Des Moines on Saturday and closer to home at Waterloo on Sunday. At the end of the season, he had won the late model point's championships at all four facilities. Not too many drivers can lay claim to an accomplishment such as that.

In addition to those four track titles, he won numerous "specials" throughout the season as well. Three of those victories really stood out for Hansen.

The first was his win in the prestigious Falstaff 100 at Hawkeye Downs Speedway. The sixth annual event was one of the top paying events on the Midwest circuit, with the purse nearly $10,000 and the winner taking home $2,300.

A stellar field of 43 late models showed up competing for 28 spots in the 100-lap feature. Lisbon, Iowa's Bill Beckman captured the pole that evening with a time 24.299 on the half-mile but when they lined up the cars for the feature event, he couldn't have been too comfortable looking over his right shoulder. Sitting there in the front row with Beckman was none other than Mr. Hansen himself. Hansen, driving a car built by anther legend Ed Sanger, took the lead from the onset and never looked back in winning the event before a crowd of 7,000.

Another track that was a favorite of Hansen's was the super 1/2-mile at the Wapello County Fairgrounds in Eldon, Iowa. The annual Pepsi-Mountain Dew Special took place there and Hansen took the victory over fellow competitor Ed Sanger and 39 other top hotshoes.

The third and final "big" victory happened on a track that was a little smaller (1/3-mile) but another favorite of Hansen's none the less. Tunis Speedway in Waterloo held their annual Coke Special. A little luck came into play for Curt in this race. Hansen won the first heat, which drew him the pole for the $750-to-win feature. As the saying goes, Hansen "blew the doors of the competition" in the 40-lapper picking up an additional $200 in lap money.

Hansen mentioned that while he preferred the bigger tracks, Tunis always kept him alert and tested his reflexes. "A shorter distance," Hansen remarked, "is also a test of a driver's ability."

Hansen showed fellow drivers that he was a steady performer with finishes no lower than second or third on most nights. But it was not his second and third place finishes that made him popular with his fans. It was his ability to win the big race.

With his tremendous success in 1978, there was no doubting Curt Hansen's ability as a late model driver.