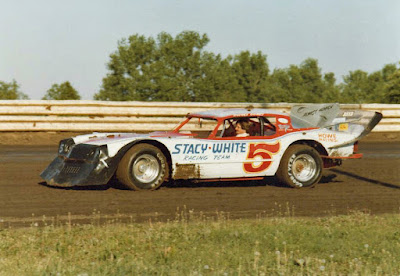 Rodney Combs
by Lee Ackerman
Omaha, Neb. — One of the most versatile drivers in racing in the 1970s and ’80s was a Loveland, Ohio, native known as “the Rocket,” Rodney Combs. Combs had success on the asphalt, winning the ASA National Championship in 1975 and 1977. Later he would take to the dirt tracks moving to Lost Creek, W.Va., and become one of Dirt Late Models’ leading stars of the era.

A multiple time winner of the “Hillbilly 100,” Combs would win 14 NDRA races and would be the 1983 NDRA National Champion. Later he would run in all three of NASCAR’s leading divisions with limited success. In 2001 Combs was a member of the inaugural class of inductees into the National Dirt Late Model Hall of Fame.

In 1980 Combs came to Iowa for three big races and with a combination of skill and lady luck walked away with wins in all three.

The first stop for Combs was on June 7 at the Davenport Speedway. The race was a part of the “Iowa State Dirt Track Championship” and on Saturday, one round of qualifying was completed before the rain set in. It was all Combs needed as he blew away the four-year-old track record by over one and one-half seconds, stopping the clock at 24.10 seconds. Close behind in qualifying was Don Hobbs of Bloomington, Ind., with a 24.15 with Omaha, Nebraska’s Joe Kosiski clocking at 24.37 seconds.

On Sunday, while the heat races were going on, Combs made an engine change and it proved to be the right choice. Heat races were won by Kevin Gundaker of St. Louis, Don Hoffman of Des Moines, Johnny Johnson of Morning Sun and Bill Zwanziger of Waterloo with Dan Dickey of Packwood taking the consolation.

But it would turn out to be a long feature. Twice the drivers were pulled off the track during the feature because heavy dust made it impossible to see. The track was watered several times and calcium chloride was put on the track and packed in. Finally, the track surface was in good shape. Combs would lead all 101 laps of the “WZZC 101” feature, and take the win.

Perhaps an even more impressive run was that of Tom Helfrich of Haubstadt, Ind., who finished second after running the last 60 laps on seven cylinders. Don Hoffman would lead the Hawkeye state contingent with a third-place finish, followed by Nebraska’s Joe Kosiski, Johnny Johnson, Dick Schiltz, Leon Plank and Ed Sanger rounding out the top eight.

Two days later on June 10, it was off to Hawkeye Downs and the eighth running of the “Miller 100.” An estimated 6,000 fans were on hand for the event. Fifty-one cars took time with Winona, Minnesota’s Lance Matthees setting quick time at 23.475 seconds. Combs, was right behind at 23.545 seconds followed closely by Dick Schiltz, Tom Hearst, Leon Plank and Roger Dolan. The 28 fastest would go to the “Miller 100.”

Feature time would prove interesting. It was one of those races that seemed like it would never get going and after it did, went off very smoothly. Before they could get a lap in, there was a big pile-up that eliminated defending race champion Verlin Eaker of Mechanicsville and Dan Dickey of Packwood. Restart number one got a lap in before another wreck would eliminate Larry Wasserfort of Cedar Falls. Restart number two, still with only one lap in the books would see Mike Niffenegger of nearby Kalona eliminated from the action.

After they got the bugs worked out, the feature turned into an almost green white checker affair. Tom Hearst grabbed the lead from the outside pole with Matthees second. By lap 20, Combs had gotten around first Matthees and then Hearst for the lead. Combs would end up stretching his lead to nearly a half lap over Hearst and later Schiltz before lap race yellows tightened the field.

It really didn’t matter though, as Combs would race off to a straightaway win over Hearst.

Following Hearst were Don Hoffman, Dick Schiltz, Denny Osborn, those five being the only cars on the lead lap. For the second time in two days the Rocket had bagged a win in Iowa.

In September, Rodney Combs would return to Iowa for the third running of the “Yankee Dirt Classic.” This time he would need a little luck to win. First of all, the Friday night segment of the Yankee was rained out, so the show was made a Saturday-Sunday event. Overcast skies and cool temperatures would contribute to a smaller than expected crowd.

On Saturday night Combs took up where he left off by setting a new Hawkeye Downs track record in qualifying. Combs turned a lap of 22.265 seconds breaking the track record set in July by Dick Schiltz. Schiltz would show his mastery of the track by setting second quick time at 22.389 seconds. Johnny Johnson, Tom Hearst, Billy Moyer and Roger Dolan would round out the six locked into the front of the feature. Billy Moyer would win the dash for the six fastest cars.

The six-car inversion from time trials placed Roger Dolan on the pole. Dolan would grab the lead from the start of the race and lead until nearly the halfway point when Leon Plank made a thrilling pass to go from third to first. Plank then held the lead through lap 97. On the 98th lap Combs edged ahead of Plank by inches at the finish line, with Plank back out ahead as the two drivers took the white flag. With Combs running the outside and Plank running the inside, the two battled for the win, but two lapped cars gave Combs the advantage on the outside and he raced across the finish line to claim his third Iowa win in a row.

Combs gave Plank a lot of credit. “He (Plank) drove a heckuva race, I’ve lost races the same way, it could have gone the other way,” said Combs.

The win was worth $5,000 plus some lap money for Combs, who became the first non-Iowan to win the “Yankee Dirt Classic.” An obviously dejected Plank would have to settle for second followed by Roger Dolan, Dick Schiltz, Kevin Gundaker, Jim Curry, Fred Horn, Dave Chase, Kenny Walton and Mike Wallace. Fourteen cars would finish on the lead lap.

For Rodney Combs, the Ohio native and Lost Creek, W.Va., resident, visiting the Hawkeye state in 1980 turned out to be very rewarding. In 1982 Combs would head south to NASCAR to begin a fairly lengthy career, racing in all three of the major divisions of the sport before ending his NASCAR career in 1997. In the following years, Rodney would return to racing Dirt Late Models, but strictly on a limited basis. Just recently, Combs showed he still had it, as he qualified for the feature at “The Dream” and finished 14th.

I would like to dedicate this column to the memory of the late Tom Emery. Tom was a resident of East Dubuque and an avid race fan. He passed away last year and thanks to the kindness of his wife, Mary Ann, yours truly is now honored to be in possession of his 30-year collection of Hawkeye Racing News.

A big thanks goes out to the Emery Family.