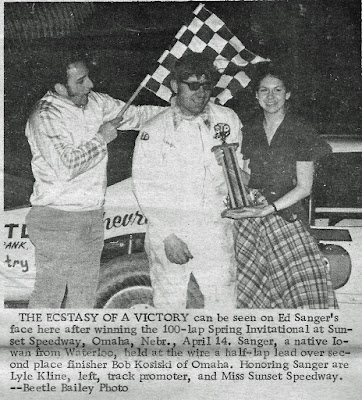 Omaha, Neb. (April 14, 1973) – Ed Sanger of Waterloo, Iowa, led an impressive late model field for over half of the 100 laps to win the $5,000 Spring Invitational at Sunset Speedway on Saturday evening.
The veteran driver, who also won the fourth heat in his 1970 Monte Carlo, took home $1,000 for his efforts.
A field of 22 late models started on the extremely rough and wind-polished track. The race was mishap-free, yet only 11 cars were still on the track when the checkers waved.
Sanger, who started on the outside of the second row, grabbed the lead from polesitter Bill Zwanziger of Waterloo, Iowa, on lap 48.
On lap 53, Zwanziger would lose his runner-up position to Omahan Bob Kosiski, when his 1972 Nova dropped a ball joint and was forced to exit.
Kosiski held on to second place for the remaining 47 circuits but couldn’t touch Sanger, who maintained a half a lap lead throughout the second half of the race. Kosiski would pocket $600 for second place.
Sanger and Kosiski would lap the field several times, causing scorekeepers additional time, at the conclusion, to tally up the final statistics.
Eventually, a pair of Council Bluff, Iowa, drivers, Ed Morris and Wally Nissen, would claim third and fourth respectively. Denny Hovinga of Laurens, Iowa, would round out the top five.
Of those top five finishers, three carried 1972 point championships at various tracks. Sanger at Cedar Rapids, Independence, Oskaloosa and Waterloo. Kosiski at Omaha and Nebraska City. Hovinga at Algona, Alta, Boone and Webster City.