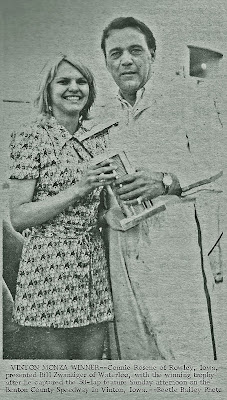 Vinton, Iowa (April 23, 1972) - Waterloo, Iowa's Bill Zwanziger worked into the top spot at the midway point of the feature event, built a comfortable lead, then escaped some last lap efforts by Ed Sanger to nail down the 50-lap Monza Championship at the Benton County Fairgrounds on Sunday afternoon.

Zwanziger's win in the 50-lap grind gave him a clean sweep for the afternoon. He would set quick time during qualifying, touring the quarter-mile in 17.38 seconds, then nipping Independence, Iowa's Glen Martin the a hotly-contested first heat.

It would be the second heat winner, Al Mayner of Winthrop, Iowa, however, that would set the pace for the first 23 circuits in the main event. Zwanziger would put his "foot to the floor" in his Al Frieden-prepared 1970 Nova and slip past the flying physician on lap 24 to take the lead for good.

Lap 46 provided a scare for Zwanziger when he was slowed by lapped traffic, and Sanger, seeing a opportunity, applied pressure.

But Zwanziger, the 20-year racing veteran did some quick dodging through traffic to re-build his lead to a two-car margin ahead of Sanger at the finish.


Despite nagging mechanical woes, Glen Martin would hang in there to finish third while Mayner would settle for fourth place. Larry Wasserfort of Cedar Falls, Iowa, would round out the top five.