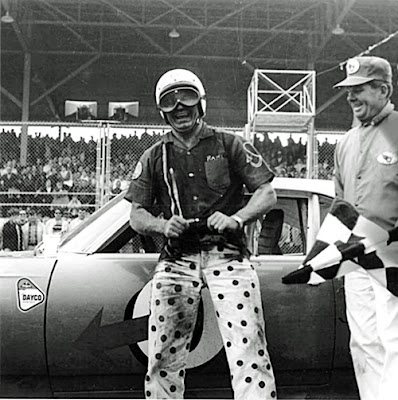 Ramo Stott performs a victory dance after winning the prestigious Hawkeye 200 at Hawkeye Downs.
(April 28, 1968) – Ramo Stott, trying to shed his “bridesmaid” role, whipped Ernie Derr by one and half laps to capture the Hawkeye 200 late model stock car race in spectacular fashion on Sunday afternoon at Hawkeye Downs.
A paying crowd of 7,551 watched Stott win hi second feature in three starts this season on the IMCA circuit and increase his point lead over Derr.


Ramo is seeking his first national title after three consecutive runner-up finishes behind Derr. The two “Keokuk Komets” were separated by only 15 points entering the 200-lap slugfest.


Stott, so called “Mr. Personality” of the circuit isn’t sure this is his year to reign but responded, “I sure hope it is. I’ve been a bridesmaid so long I’m getting kind of tired of it.”


The oval took a good pounding in its initial test run of the year under the onslaught of a 28-car field. All four turns were dug up pretty badly, especially turn three turn, which had “washboard holes” according to Stott.


Actually that same turn three had a hand in the turning point of the race.


Derr earned the pole in his ’68 Charger as a result of winning the STP trophy dash and was enjoying a 15-second lead over Stott after 97 laps. Then John Zink’s ’65 Chevelle drop a gas tank in turn three.


When the yellow caution came out, both Derr and Stott pitted for fuel. Ramo’s car was out first and a few seconds later Derr attempted to pull out as well when his car stalled. Efforts by his pit crew to push-start his car failed and a two truck was pressed into action. By the time Derr got back on the track, Ramo owned a full lap’s lead. He was never seriously threatened the rest of the way.


Derr wasn’t talking after the race and it killed the engine while throwing water on it in an attempt to cool the radiator.


Local drivers fared well. Fred Horn of , driving a 1967 , finished fifth while Bill McDonough, behind the wheel of a 1965 Chevelle, grabbed seventh.


Race promoter Frank Winkley was presented a plaque commemorating the 20th straight year he has promoted auto racing at Hawkeye Downs. Lou Shepard made the presentation on behalf of the All-Iowa Fairboard.