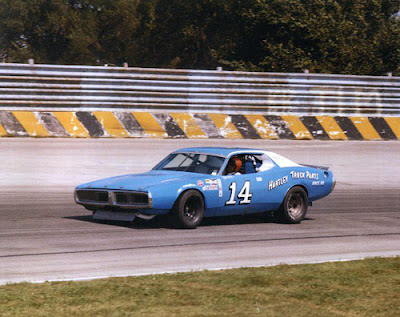 West Allis, Wis. (September 7, 1975) - Larry Moore got his wires uncrossed then had to come from the back of the pack again when the United States Auto Club got its wires crossed on his way to victory in the 250-mile Governor's Cup stock car race Sunday.

Moore had qualified his 1974 Dodge Charger on the pole Saturday with a brilliant 33.72-second (106.762 mile per hour) clocking on the one-mile State Fair Park oval track.

But when the green flag fell for the start of the race Sunday, Moore wallowed in a dust cloud while a dozen cars- flashed past him.

He pulled into the pits on the fifth lap with a missing engine. The hood went up, pair of crossed spark plug wires were rerouted to the right cylinders, and Moore was back out and on his way to the victory.

Moore charged from the back of the pack to 10th place by the 20th lap and third place 10 laps later. He inherited the lead on lap 60 when Irv Janey's engine broke a valve spring. He easily kept the top spot until the 80th lap, when he pitted under the yellow and the second foul up occurred.

Whoever was scoring for the 33-year-old Cincinnati driver evidently didn't see him pull into the pits and didn't credit him with the lap until the next time he came around, actually two laps later. As a result, Moore raced blissfully for about 10 more laps thinking he was the leader until the yellow flag came out on lap 94.

When the pace car picked up second place Butch Hartman as the leader, a furor went up. Moore's crew scurried around the official tower protesting the situation. During one lull, when the cars were on the backstretch and the main straight was quiet, one could hear a large portion of the 17,019 fans in the grandstand howling at the flagman about Moore's being shuffled to the rear of the pack.

However, Moore made up for the goof by the USAC with a strong drive in a strong car, and he was back in the lead on the 170th lap. Except for a brief five laps when everyone pitted under the green, Moore easily held his lead.

Then, 26 laps from the end, Don White blew an engine and brought out the sixth and last yellow of the race. White's blown engine left a coat of oil right in the groove and it took 12 laps to clean it up.

This left three cars, Moore, Hartman and Ramo Stott, to battle the last 15 laps. Hartman was pushing Moore when his differential went out on the main straight on lap 240 with a billowing trail of white smoke.

This left Stott to catch Moore. The veteran Stott quickly caught Moore and dosed to within a few feet of the leader, seemingly having the edge in handling while Moore pulled away on the straights. But Moore quickly rectified this and held Stott off to win by two car lengths.

"I was trying too hard," Moore said, explaining how Stott gained on him with about nine laps to go. "When I smoothed up and began using a little bit of brake going into the turns I could put a little bit of ground on him.

"I had a tendency to run in the corners too deep. I was trying to hurry too much. I can remember eight or 10 times when I went in too deep and got out of shape bad. I just had to remember to be patient."

Stott said he could catch Moore at the end but couldn't pass him. "There's a difference," he said. "You can use the whole race track to catch him. But when you want to pass him, he's in the groove and you've got to go high or low to get around him. You can't just run over him."

Stott said he didn't appreciate a bump he got from Moore coming out of turn four on the 176th lap. Stott was a lap down after a fuel stop and the two were coming out of four together, Stott outside, behind Bay Darnell's car. Moore was inside with a clear track. Moore bumped him lightly just out of the turn.

"I didn't think too much of that," said Stott. "He was trying to put me into the fence and that doesn't move. He wasn't giving me any room. I try to give a guy room."

"It couldn't have been a very hard bump, because I don't remember it," Moore countered.