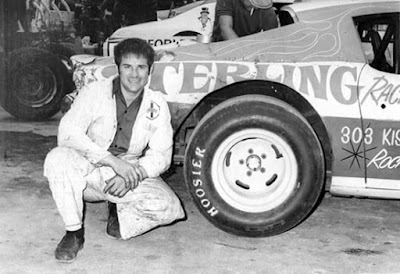 Joe Shear
Kaukauna, Wis. (September 4, 1972) – Joe Shear proved once and for all that Dick Trickle can be beaten.

The crew-cut driver bested Trickle in qualifying, the heat race and the 100-lap feature during the “Blue” portion of the annual Red, White and Blue Series at Wisconsin International Raceway on Sunday afternoon.

Shear, who has won five track championships at Rockford Speedway, paced the 33-car field all afternoon long and then brought the 5,881 in attendance to their feet as he nipped Trickle at the finish by one car length.

Trickle managed to hold on to his point’s lead for the three race series and became the official champion with a total of 2,440 points. Shear compiled 2,110 points, good for second place in the series.

Larry Behrens of Northfield, Minn., paced the field for one lap before Lyle Nabbefeldt took over. The Nekoosa veteran set the pace until the seventh lap when Tom Reffner of Rudolph roared past in his 1970 Mustang. Reffner held off Shear until lap 22.

Shear proceeded to build up a quarter of a lap lead until that was chopped in half on lap 87 when starter Bob Frank waved the yellow flag for debris on the track. On the restart, Trickle started to whittle down Shear’s lead and by the 97th round was breathing down the leader’s tailpipes. Trickle would make a last-ditch effort to get by Shear on the final lap but didn’t have to power to do so.

Shear’s win was worth $1,000 while Trickle picked up $700 for placing second. Larry Detjens, driving a 1972 Dodge Challenger, took third with Tom Reffner placing fourth and Jim Sauter in fifth. Jim Back, Marlin Walbeck, Rich Davis, Behrens and John Scott rounded out the top 10.

The third heat was halted on the 14th lap when Boyce Sparkman from Loves Park, Ill., spun and rammed into the third turn wall. Marv Marzofka of Nekoosa piled his 1972 Camaro into the rear of Sparkman's 1972 Chevelle and was rapped from the rear by Dennis Burgan of Wadsworth, Ill.
Sparkman's car was damaged too heavily to continue, but Marzofka and Burgan returned to compete in the feature event.