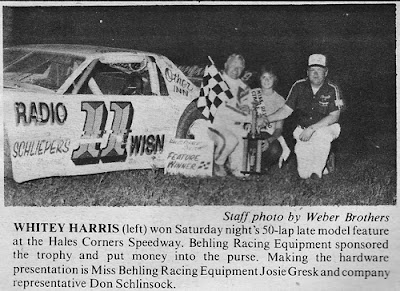 September 3 – For the third time in four years, Whitey Harris was the late model champion at Hales Corner Speedway in Franklin, Wis. The Lake Villa, Ill, chauffeur put himself out of reach on Saturday night by running away with the 50-lap feature. Harris’ run was typical, starting 17th in the field, maneuvering through traffic and taking the lead at the midway point of the main event. From there, Harris left the rest of the pack and began lapping slower cars, finishing a bumper’s length behind the sixth place car at the finish.
September 3 –Ed Sanger of Waterloo, Iowa, took the lead on lap 17 of the NASCAR Grand American 50-lap season championship feature and went on to victory at Farley (Iowa) Speedway on Saturday night. Sanger took the lead from Tom Bartholomew of Waterloo to win the late model title.
September 3 – “Injun” Joe Merryfield of Des Moines, Iowa, came out of retirement briefly to take the Grand Finale 40-lap invitational late model feature at Adams County Speedway in Corning, Iowa, on Saturday night. Merryfield, who had not raced regularly in over two years, wheeled a car prepared by his old friend Jim Wilson, also of Des Moines In their years together Merryfield had won many races with his biggest win coming in the 1975 World 100. Tony Stewart of Washington, Iowa, led the opening 27 laps of the main event before lapped traffic gave Merryfield the chance to pass him on lap 28 for the lead and eventual win. Stewart would hold on for second followed by Ken Walton of Viola, Iowa, Glenn Robey of Omaha, Neb., and Kenny Fenn of Washington.
September 3 – Vern Weber and Dr. Jack Hunt, co-promoters of Greater Iowa Racing, Inc., announced on Saturday they had sold the corporation to Jerry Blue of West Union, Iowa, ending their 19-year affiliation at the Buchanan County Fairgrounds in Independence, Iowa.
September 3 – Kenny Schrader overpowered Rich Vogler to claim the 100-lap USAC national midget feature at Belle Clair Speedway in Belleville, Ill., on Saturday night. Schrader would squeeze past Vogler on lap 61 for the lead and then continue to fight off the Indiana hard-charger for the remaining circuits until Vogler dropped out with a driveline problem on lap 97. Schrader cruised to the wire for the victory with Ken Nichols, Tom Bigelow, Mel Kenyon, and Kevin Doty following. 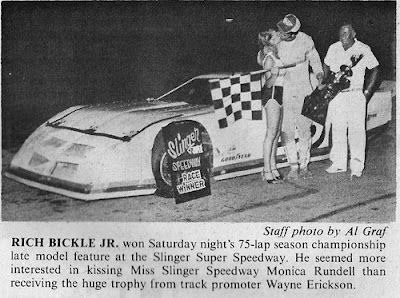 September 3 –Rich Bickle Jr. highlighted Slinger (Wis.) Super Speedway’s season-ending championship night by winning the 75-lap late model feature to wrap up his first career track title on Sunday evening. The triumph gave Bickle a 73-point margin over runner-up Conrad Morgan in the division’s final standings. Morgan’s bid for the title ended early in the contest when mechanical issues forced him to withdraw to the pit area.
September 4 - NASCAR Winston Racing Series Central Region point’s leader Roger Dolan of Lisbon, Iowa, captured the 35-lap season championship at the Dubuque (Iowa) County Fairgrounds on Sunday night. Dolan, who also won the points title at Dubuque, led the event from start to finish with Gary Tigges of Durango, Iowa, taking second and Ed Sanger of Waterloo, Iowa, in third. The sportsman title was won by Denny Ansel of Dubuque, who also led wire to wire in the 20-lap event. Ron Barker of Dubuque took the fun class season championship race as well as the point title.
September 4 – Tony Izzo of Bridgeview, Ill., won the 100-lap Prairie State Stock Car Classic late model feature at Santa Fe Speedway in Hinsdale, Ill., on Sunday night. Izzo led start to finish in the race but was pressured Jim O’Conner of Kankakee, Ill., in the early part of the event and then Ken Pohlman of Worth, Ill., in the closing laps. The victory was the fifth of the season for Izzo and his second on the track’s longer oval. 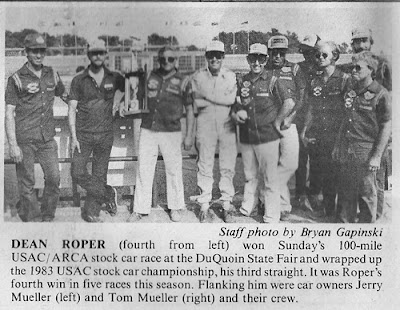 September 4 – Dean Roper won the 100-mile USAC/ARCA stock car event at the Du Quoin (Ill.) State Fairgrounds on Monday afternoon. The win was Roper’s fourth of the year and clinched the 1983 USAC stock car championship, his third consecutive crown in the division. Roper followed with the lead pack for most of the event and as they started dropping out due to accidents or overheating; Roper would take over and lead the remaining 32 circuits. Butch Garner, Tom Meinberg, Joe Wallace, and Rick O’Brien rounded out the top five.
September 4 – Sunday night’s World of Outlaws Shootout at I-70 Speedway in Odessa, Mo., shaped up to be a battle of the only two champions the sprint car organization has ever known. And by the time the 30-lap feature distance was completed, two-time king Sammy Swindell of Bartlett, Tenn., was a decisive victor over Steve Kinser of Bloomington, Ind. Kinser led the opening 22 circuits but a red-flag period allowed Swindell to make some adjustments on his Old Milwaukee #1 and on the restart, took command and charged to the $10,550 victory. Kinser settled for second while third place went to Ron Shuman of Mesa, Ariz. 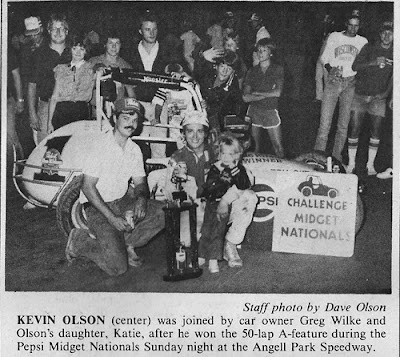 September 4 – Kevin Olson beat Don Tyler by a scant two feet to win the 50-lap “A” main at the second annual Pepsi Midget Nationals during the season-ending Badger Midget Racing Association program at Angell Park Speedway in Sun Prairie, Wis., on Sunday night. Olson, who collected $2,000 from a purse of more than $10,000, led only four laps of the contest as the capacity crowd was treated to a close, exciting race. Tyler and Doty ran wheel to wheel on the last three laps of the race with Doty overpowering Tyler on the front stretch as the checkers flew. 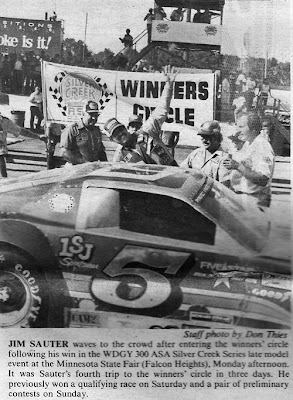 September 5 – Jim Sauter led the entire 300 laps to win the ASA/Silver Creek Series late model stock car race Monday afternoon at the Minnesota State Fair Speedway in Falcon Heights, Minn. Despite his awesome display of power in his Pontiac Firebird, Sauter finished only two car lengths ahead of Mike Eddy at the finish.  Eddy kept a similar margin over third-place Dick Trickle.  Sauter earned $12,050 for the victory out of a posted $92,000 purse.
September 5 – Gary Bettenhausen won the 100-lap USAC Silver Crown event Sunday at the Du Quoin (Ill.) State Fairgrounds before 10,000 race fans. Bettenhausen took over the top spot from early leader Ken Schrader. He would hold that spot until Sheldon Kinser gained first place on lap 43. Kinser’s lead would last until lap 51 when Bettenhausen would take over once more and hold it until the checkers.  Chuck Gurney, Schrader, George Snider and Bill Englehart would round out the top five finishers. 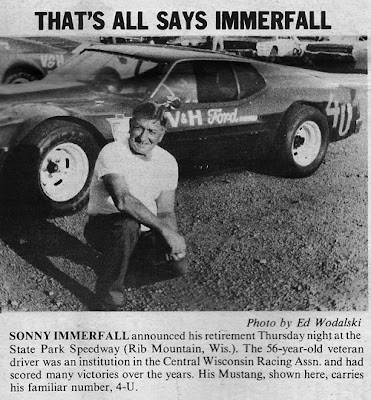