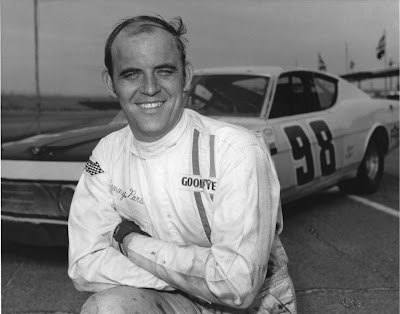 Dayton, Ohio (September 8, 1968) – “That’s the first time I’ve ever driven 500 laps,” said a happy Benny Parsons, after picking up a check for $2,700 for winning ARCA’s Dayton 500 for late model stock cars.
The 27-year-old Parsons, in his 1968 Ford Torino, cruised to a four-lap victory over Bobby Watson, also in a Ford. Iggy Katona placed third, 14 laps back, Larry Clemons fourth and Namon Martin fifth.
Les Snow paced the first 118 laps, but while pushing his 1967 Plymouth, blew the right front tire and hit the fence. Andy Hampton took over for the next 11 circuits but Parsons grabbed the top spot on lap 130 when the former pitted his ’67 Charger.
After that it was a breeze for Parsons, with his only test coming from NASCAR hotshot Charlie Glotzbach Driving in relief of Snow, Glotzbach attempted to get around Parsons from lap 210 to 231.
“I wasn’t going to let him pass me,” said Parsons. “Sure, I was eight laps ahead, but if I let him go by and then a caution comes out, he could gain a lap.”
Glotzbach, like Snow, waited too long to pit and blew tires on the right side to put the blue Plymouth out of action on lap 231.
“Benny’s some kind of driver,” Glotzbach remarked. “I hung in there because I had nothing to lose.”
Parsons made planned pit stops on laps 150, 300 and 450. On the final stop he took on two right side tires. This was Parsons' fourth Dayton 500 try and first-ever win. Last year he was running first when a car in front of him blew an engine and Parsons lost control on the oil and hit the fence.
Results –
1.       Benny Parsons
2.       Bobby Watson
3.       Iggy Katona
4.       Larry Clemons
5.       Namon Martin
6.       Keith Ploughe
7.       Gene Crittenden
8.       Bob Thomas
9.       Bill Clemons
10.   Ron Kudek