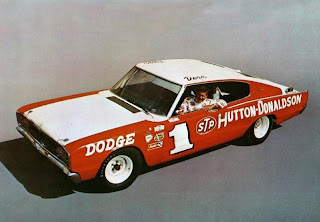 Ernie Derr
(September 19, 1967) - Ernie Derr, the 46-year-old speed king from , virtually clinched his eighth national IMCA stock car championship when he roared to victory in the 25-lap feature event of the stock car program at the Kansas State Fair on Tuesday.


Winner of more feature car races than any other driver in any field of auto racing, Derr ran his record of victories to 208 out of 530 features since 1955. He is the defending champion on IMCA’s dirt and paved ovals in over a dozen states. He won stock features here both Monday and Tuesday.


What may have been more important is he increased his point lead over Ramo Stott, another speed merchant from Keokuk, to the point where Stott would have to win every race remaining on the IMCA sanction list this fall and Derr would have to finish out of the money if Stott is to catch him.


Only the late Gus Schrader, a big car driver with seven national records, has had anything like a comparable record.


Derr said he liked the fair oval, and he proved it with a driving performance that seemed letter perfect. Although Lenny Funk, the flying farmer from Otis, had earned the pole position, Derr shot around him to take the lead before cars had moved 150 yards from the starting line. Ramo Stott passed Funk on the fifth lap, but neither ever mounted a serious challenge to Derr.


Derr is his own race strategist, and he had his car set up perfectly for the well-soaked dirt speedway that he never skidded on corners even while taking them at greater speed than other ears, which frequently skidded high or out.


Derr broke his own record in the feature, despite a one lap run under the caution flag. He clocked the 25 laps in 11 minutes and 38.81 seconds as compared with the old record of 11 minutes and 42.65 seconds that he set in 1963.


A field of 17 cars started, but not all finished. Willie Crane, , spun out on the turn three, and wound up on a mud bank half-way into the infield.


Elmer Walton, , lost a wheel as he tamed onto the back straightaway. Walton stopped, but the wheel rolled the length of the straightaway, started around the banked curve, and finally flopped on mud which had been bladed unto the infield.