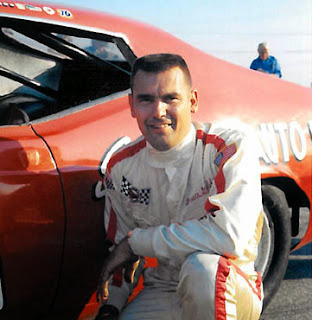 Bruce Gould
New (September 23, 1973) – Bruce Gould took the lead on the 108th lap and except for a few pit stops, led the rest of the Sunday afternoon to win the Dayton 500 ARCA new car race at the New Bremen Speedway.


Bobby Watson, who started on the outside of the front row, led from the second lap until he blew a tire in the third turn on lap 108, and hit the guardrail. , Watson’s teammate, had no place to go and crashed into Bobby, sending Watson to the local hospital where he was listed in satisfactory condition with chest injuries.


The most spectacular accident of the day, however, occurred in the pit area after John Sellers, whose car had been backfiring, drove in for a pit stop. Sellers’ car was put on a jack to change a tire while his crew began to refuel the machine while it was still running.


The car backfired again while the fuel was being poured, causing a fire. No one was injured but it took more than an hour for the race to continue because all of the speedway fire extinguishing equipment was used up and more had to be obtained.


Fourth place finisher Mike Johnson, who received some relief driving from Jack Shanklin, was disqualified and moved back to last place for running oversized tires.