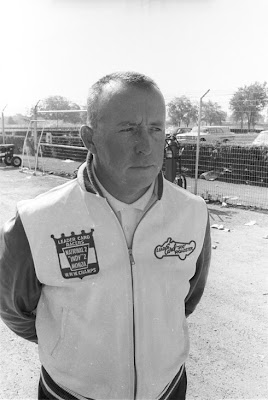 
A, J. Foyt, the Indianapolis 500-mile classic winner, made one of his rare starts in the little 110 Offys and led for the first 57 laps before he was forced to the sidelines for a tire change and fuel.


Foyt little more than got back on the track until he was back in the pits after dropping to fourth with the first stop. This time a faulty fuel line forced the speeding Texan out of the race. He was unable to return.


Jud Larson of finished second while Bobby Grim of Indianapolis took third in the accident-free contest.


Although there were no major mishaps, the caution flag was on through much of the late going because of stalled cars and other mechanical trouble on the track.


Branson, throttling a Tornado Automotive Special, was second to Foyt through the first half of the race.


Foyt took the lead on the first lap with Branson, Tommy Copps, Bobby Marshman and Mel Kenyon falling in behind him at the 10-mile mark.


At the 50-mile mark, Foyt had built a half-mile lead over Branson with Copps, Bob Tattersall, Grim, Les Scott, Kenyon and Larson behind him in that order.


Foyt then dropped out on lap 57 allowing Branson to take over the point and maintain a comfortable lead over the other contenders.


Larson did his best driving in the final 30 laps to place second. He was fourth at the 80 lap mark but climbed to third on lap 90.


Branson averaged 90.942 miles per hour in scoring his first-ever victory on the Du Quoin track.