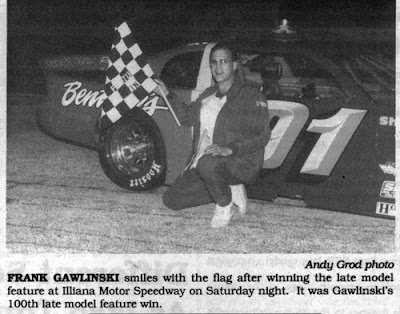 1995 – Racing history was made at Illiana Motor Speedway when Frank Gawlinski drove to his 100th career late model victory on the half-mile paved oval on Saturday night, May 6. The 47-year-old Lynwood, Ill., native started his career at the age of 29, a time when most race drivers are reaching their prime. Seven track championships later and eight Tony Bettenhausen Memorial victories later; it was only natural that 100 feature wins would be part of his resume. Gawlinski’s milestone win wasn’t easy as he had to come from the rear of the field after spinning initial leader John Hollifield early in the main event. Making his way back through the field, Gawlinski grabbed the point with five circuits to go in the 25-lapper and then held off the challenges of Terry Middleton and Mike White in the closing laps.


1990 – Sammy Swindell outran his brother, Jeff Swindell, to claim top honors in the 40-lap USAC Loctite/Crestliner Vans Winged Sprint Car feature Saturday night, May 5, at Tri-City Speedway in Granite City, Ill. Danny Smith paced the first 20 laps of the A-main before Sammy Swindell took command. Swindell led the second half of the race for the victory, holding off his brother and Frankie Kerr. Steve Butler placed fourth ahead of Bobby Davis Jr. In other USAC racing action, Russ Gamester led all but two laps on his way to scoring the win in the 40-lap USAC National Midget Series feature. Mike Streicher placed second followed by fast qualifier Steve Knepper.

1984 – Veteran Gene Claxton of Kansas City, Mo., used all of his track savvy in winning the NASCAR Winston Racing Series 20-lap late model feature at Lakeside Speedway in Kansas City on Friday, May 4. Claxton started on the fifth row and drove cautiously in the early going. He was fifth on the second lap, took over second on lap 5 and charged to the lead on the eighth circuit. He drove unchallenged for the rest of the event. Rick Beebe of Overland Park, Kan., would finish second followed by Ronnie Hoover on Fulton, Mo., and Andy Claiborne of Stanley, Kan. Bobby Layne of Kansas City, a long-time sprint car driver, won his first IMCA modified feature by going flag to flag in the 12-lap main event. 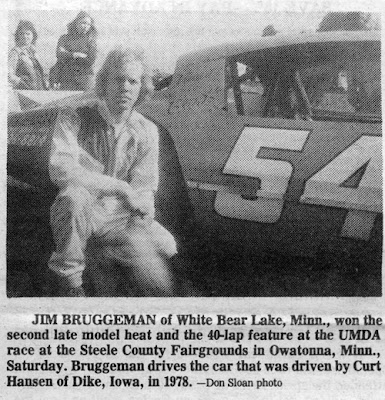 1979 - Jim Bruggeman of White Bear Lake, Minn., won the 40-lap U.M.D.A. late model feature on the half-mile Steele County Fairgrounds in Owatonna, Minn., on Saturday, May 5. Bruggeman had a big day as he also won the second heat, placing him on the front row for the main event. In the feature, he led the entire event but had early pressure from Leon Plank of Mondovi, Wis., who had to retire when he lost his water pump. Tim McDonough of Cedar Rapids, Iowa finished a distant second and Dick Sorenson of Rochester, Minn., grabbed third.