Well, if there’s a race track available, you might buy the track for one night and schedule your own race.

That’s just about what the brothers Cahill – Kenny and Larry – did when they arranged for an IMCA sprint car show to be held Saturday night, May 30, at Hawkeye Downs in Cedar Rapids.

The Cahill’s, a couple of Iowa City, Iowa farm boys, will sponsor the program through their Burger King Restaurant chain, in conjunction with National Speedways, Inc.

“It all came about when we found out there was no race scheduled here that night,” said Larry Cahill, who like his brother used to drive midgets and sprint cars.

“We wanted one here, so we talked with Al Sweeney (NSI president) and he gave it the okay. It cost us $5,500, which goes to IMCA, and they pay the $3,500 purse. If there’s a good turnout, we may hold another one later this year.”

The brothers also sponsor a car on the IMCA circuit and naturally, it’s called the Burger King Special. They bought it from Buzz Rose a year ago and Rose is now the pilot.

“I guess once racing gets in your blood you can’t stay away,” said Larry. “We had been out of racing for six years, but we still were great fans.”

“We saw Buzz at Knoxville, Ill., last year and he had a new car be wanted to sell, so we bought it. We just wanted to be around racing; we both enjoy working on a race car.”

Larry said they got out of racing to begin with because they were too preoccupied with their restaurants. They now have five, including one in Cedar Rapids. And the race car is not used as a tax deduction. It’s a separate corporation and the Burger King name is on the car strictly for advertising. 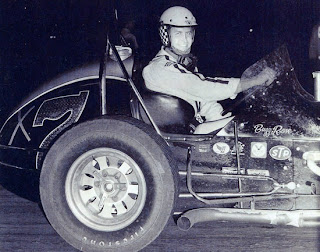 The black sprinter with a Chevy engine hasn't seen any competitive racing since last September. That’s when it was totaled out, as Rose flipped eight times at Topeka, Kan. It’s taken all winter to get it back together. “We got fast time the day it was wrecked,” remembers Larry.

The brothers tried to qualify the car for this Saturday’s Little 500 at Anderson, Ind. Buzz wasn’t able to make the trip so Kenny renewed his driver’s license. Their plans had to be aborted, though, because the drive twisted off the end of the crank shaft and they couldn’t run.” But there’ll be no problem having it ready for the May 30 race,” promised Larry.