1990 – Pete Parker guided his 1990 Lumina to a late model feature victory on Saturday night, May 12, at Shawano (Wis.) Speedway. V.J. Giguere took the lead at the drop of the green and set the early pace as Parker, who started in the fifth row, advanced towards the front. Parker overtook Giguere on lap 8, but cautions on lap 10 and 12 kept the rest of the field close behind. Chuck Buckbee, who started towards the back of the pack, would give Parker his sternest competition in the closing laps, but was unable to knock the Kaukauna chauffeur out of the top spot. Buckbee would settle for second while Russ Scheffler, Terry Anvelink, T.M. Miller rounded out the top five. 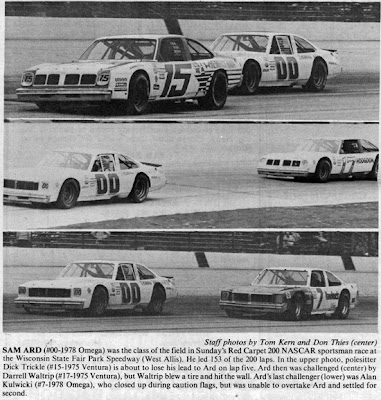 1984 – Appearing at the Milwaukee Mile for the first time in his career, Sam Ard breezed to victory in the 200-lap NASCAR late model sportsman event, outrunning home state pilot Alan Kulwicki to the checkers on Sunday afternoon, May 13. Ard, who had not driven on the one-mile oval prior to practice on Saturday, crossed the finish line two seconds ahead of Kulwicki to nail down his fourth victory of the season on the circuit. Ard, who started third, annexed the lead for the first time on lap 4 and held strong until lap 67 when he pitted. The Ashboro, N.C., pilot returned and fought his way back to the front, regaining the lead on lap 104. When he pitted again on lap 111, Kulwicki inherited the top spot until he was forced to pull his Oldsmobile in for fuel 6 laps later. Ard grabbed the point once again and never relinquished it after. Ard average 97.206 miles per hour, which was slowed by six cautions. After Ard and Kulwicki, a contingent of drivers, Trickle, Bobby Allison, Davey Allison and Dale Jarrett, all finished a lap down. 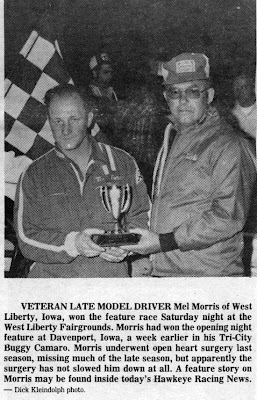 1979 – Mel Morris of West Liberty, Iowa, a 20-year veteran and winner of several track championships, out dueled another veteran, Ed Sanger of Waterloo, Iowa, to win the late model feature at Morris’ hometown track at the Muscatine County Fairgrounds on Saturday, May 12. Sanger would jump into the lead at the start ahead of polesitter Curt Hansen of Dike, Iowa, but Morris, who started in the second row, would pass Sanger coming out of turn four on the lead lap. Morris would lead the remainder of the 25-lapper, but not without constant pressure from Sanger as they were never separated by more than a car length throughout the contest. Steve Keppler of Marion, Iowa, Ron Hemsted of Lone Tree, Iowa and Hansen would round out the top five finishers. 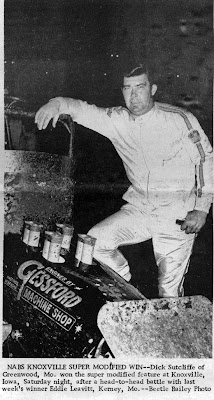 1973 – A head to head battle between point leaders Dick Sutcliffe and Eddie Leavitt highlighted the super modified program at the Marion County Fairgrounds in Knoxville, Iowa, on Saturday night, May 12. Leavitt, of Kearney, Mo., would shoot out to the early lead and appeared to be well on his way to victory. However, two cautions midway through the 25-lap event bunched the field and gave Sutcliffe new life. On the second restart, Sutcliffe got the jump on Leavitt and the Greenwood, Mo., driving star proceeded to hide from the rest of the field, lapping all but the top four finishers. Following Sutcliffe and Leavitt to the finish line was Jerry Blundy of Galesburg, Ill., Thad Dosher of Topeka, Kan., and Darrel Dawley of Sioux Falls, S.D.