1990 – Rich Dauer of Lindsborg, Kan., proved to be the fastest man in Kansas over the weekend as the Kansas Late Model Association (KLMA) played host at Plaza Speedway in Junction City, Kan., on Friday, May 18 and Salina, Kan., the following night, May 19. Dauer won Friday’s feature by attrition as early pacesetter Shelby Steenson of Salina, and later Rodger Peck of Manhattan, both appeared ready to lay claim to the winner’s circle before dropping back due to mechanical knockouts allowing Dauer to seize the top prize. Saturday saw Dauer start mid-pack in the 20-car field and set a torrid pace to catch the leaders. Dauer would eventually pass the track hotshoe, Lonnie Smith of Wichita, on the last lap to take his second straight victory. 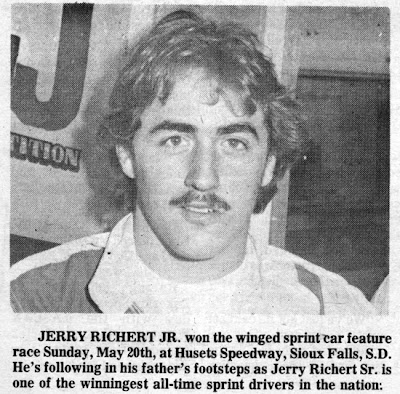 1984 – Jerry Richert Jr. of Forest Lake, Minn., made a last lap pass to take the checkered flag at Husets Speedway on Sunday, May 20. Richert, driving the L.L. Woodke Special, had led early in the 25-lap event, but lost the top spot to a hard-charging Marlon Jones of Hartford, S.D. Jones would run into trouble late in the contest enabling Richert and Rocky Hodges of Des Moines, Iowa to close the gap. Both Richert and Hodges threatened for the lead, but Jones held them off until the last lap when both slipped around Jones and Richert nudging by Hodges in the final turns. The second-generation driver collected $1,100 for the hard-earned victory. 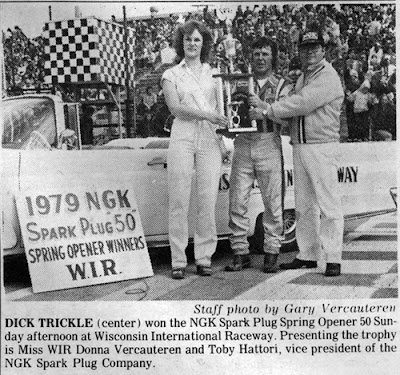 1979 – Dick Trickle, a three-time winner of the Red, White and Blue State Championship Series, scored a two-car length victory over rival Tom Reffner to win the NGK Spark Plug Spring Opener 50 Sunday, May 20 at Wisconsin International Raceway in Kaukauna, Wis. Trickel, who drove a 197 Firebird, held off a late charge by Reffner to win the 50-lap event on the WIR half-mile paved oval. Earlier in the afternoon, Reffner blazed around the track with his 1978 AMX to establish a new one-lap record with an average speed of 89.3 miles per hour (20.155 seconds). Steve Burgess led the first 12 laps of the feature before yielding to Mike Miller, who led the next 11. After a caution flag bunched up the field, Trickle would get by Miller on the backstretch and then spend the remaining laps fending off Reffner. Miller would finish third followed by Marv Marzofka and Larry Schuler. 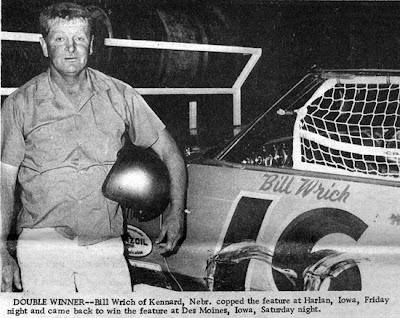 1973 – Bill Wrich of Kennard, Neb., was a double winner on the weekend, winning late model features at Shelby County Speedway in Harlan, Iowa, on Friday, May 18 and then taking top honors at the Iowa State Fairgrounds in Des Moines on Saturday, May 19. Wrich got into a classic duel with Jim Wyman of Griswold, Iowa on Friday night. Wrich and Wyman ran neck and neck for 20 laps until Wrich attain the top spot with 5 to go Once the lead swayed Wrich’s way, the veteran driver made sure it was his for good. Wyman made repeated attempts in the last few laps to regain his previous spot back, but Wrich held his line and took the checkers for his third win of the evening. Wrich’s victory in Des Moines the following night was a bit easier as he took the lead from Phil Reece of Des Moines on the first lap and never looked back in winning the 25-lap feature. Bill McDonough of Cedar Rapids, Iowa would score runner-up honors and Reece would settle for third. Don Hoffman of Des Moines and Darrell Dake of Cedar Rapids would round out the top five.