Omaha, Neb. - In the 1930’s midget auto racing was in its heyday with tracks popping up all over the place. It didn’t take much to build a small ¼-mile or 1/5-mile race track to attract midget drivers from around the area. Some of those tracks would last for several years others would only last for a few races races. One of the hot beds of midget racing during this era was the Midwest.

Several outstanding midget drivers of the era would either be born or would live in Cornhusker State. Included in the list would be Nebraska Auto Racing Hall of Fame Inductee’s Ronney Householder, Sam Hoffman, Otto Ramer and Carl Forberg. But another Cornhusker midget ace of the era would prove to be a very tough customer and that was Eddie Krajicek.

Edward Krajicek was born in Iowa on March 4, 1911 but resided in Omaha for the most part of his life. When Eddie started his career, the name Krajicek seemed to drive the press crazy and it would be spelled many different ways before he decided to shorten it and go by the name Eddie Kracek.

Kracek actually burst on the scene in 1930 (his second year of racing) in stock cars when he won on the mile at Ak-Sar-Ben in Omaha on August 24 and again on October 30 defeating the likes of Lawrence Hughes and Bert Ficken. Information on his racing career then becomes very sketchy until 1935 when his midget career would take off.

In 1935 they built a race track in South Omaha and called it Western League Park. The track opened for midget auto racing on June 2, 1935 and attracted the best drivers in the area including Kracek, Forberg, Ramer, Johnny Russo and Pat Cunningham to name some of the best. For the first seven weeks Kracek totally dominated the action winning all seven features and scoring several clean sweeps behind the wheel of the Cliff Carlson H-D powered midget. He also raced at a track north of Omaha in Washington County that year but no results were found.

In May 1936 a new track opened near Sioux City, Iowa. Called Riverview Park, the track would be a hot bed for midget auto racing for several years. Many of the best midget drivers in the Plains states area would compete at Riverview including in addition to Kracek, Forberg, Sam Hoffman, Danny Oakes, Ken Beckley, Charlie Taggart and Perry Grimm just to name a few.

Kracek would be a force at Riverview winning several features there and in 1937 according to records would lead the point race throughout the first half of the season (No point standings were found for the later part of 1937). In 1938 Kracek did not compete every week at Riverview in a year which saw Sam Hoffman dominate action.

Along the way Kracek would expand his horizons and race as far east as the Detroit/Flint, Michigan area. He raced at the one-mile Wisconsin State Fair Park in Milwaukee. He would also begin racing regularly at Olympic Stadium in Kansas City as well as the indoor midget races at the American Royal Coliseum in Kansas City. During the 1936 to 1938 time frame, he would compete in North Platte, Ord and Lexington, Nebraska, Harlan, Iowa and several tracks in South Dakota and Minnesota.

In 1939 a new track was built at 72nd and Pacific in Omaha and was called Indian Hills. The track had a very short history and Kracek, then driving for Otto Ramer, missed the opening show because his car was not ready. The next two races at the facility saw Kracek totally dominate the action scoring clean sweeps in both programs. In addition to Indian Hills, he would continue racing at Riverview Park and Olympic Stadium as well as events at facilities such as Lakeside Speedway in Englewood, Colorado, Centennial Park in Council Bluffs and the Nebraska State Fairgrounds. Kracek would finish off the 1939 racing season by racing in several events at the Alamo Speedway in San Antonio, Texas picking up several heat race and pursuit wins. 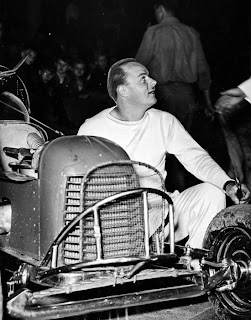 Eddie Kracek ﻿works on his midget prior to a race


In 1940 Kracek would continue racing at Riverview Park in Sioux City scoring at least one win, he would also race and win at Landis Field in Lincoln. He also raced at least twice in Des Moines. He raced a number of times at Olympic Stadium in Kansas City and it was in September, 1940 he scored the biggest win of his career at Olympic when he won the prestigious 75-lap Great Northern Midget Championship competing against a star studded field of nearly 50 midgets. The previous week he led 42 of the 50 laps of the Western States Championship at Olympic before having problems with a strange car. Ironically he was driving for midget great Vito Calia that night. Later that year he would attend midget races in Los Angeles and Mexico but it is unclear if he actually raced in these events.

In 1941 Kracek would put a lot of miles on going from race track to race track. He raced as far east as the Detroit area and campaigned considerably in Illinois winning a feature at Raceway Park in Blue Island, Illinois against the likes of Tony Bettenhausen, Ray Richards and Myron Fohr. He won at least back to back features in Taylorville, Illinois and competed in several other Illinois tracks such as Riverview and Mazon, Illinois and the International Amphitheatre in Chicago. He also raced a number of events at Horlick Athletic Field in Wisconsin. It is believed he raced in the St. Louis area as well.

In 1941 they built a racetrack inside the Creighton Stadium in Omaha. Seven of the eight scheduled races were held and although Kracek was much advertised for the event, but because of his schedule in Illinois, Michigan, Wisconsin and St. Louis he was able to race in only two events. He swept the competition both nights winning all three events he competed in each night once again behind the wheel of the Otto Ramer midget.

Kracek would continue to compete in midget races in 1942 although not as many were held due to World War II. Unfortunately just a couple of weeks before all forms of racing were outlawed in the United States because of the war effort, Kracek was badly hurt in a race at Olympic Stadium in Kansas City in July. He would pass away on August 4, 1942.

During his career Eddie Kracek competed against the best of the best, many times in the other driver’s backyard. The list of drivers he competed against would read like a who’s who of midget racing including; Tony Bettenhausen, Ray Richards, Myron Fohr, Vito Calia, Cowboy O’Rourke, Sam Hoffman, Ronney Householder, Carl Forberg, Otto Ramer, Johnny Russo, Johnny Zale, Louis Durant, Pee Wee Distarce, George Binnie, Ben Musick and Harry McQuinn. While it is not known how many track championship Kracek actually won, in the last few years of his career he was often billed as the Nebraska State Champion.

In quite a few cases documentation shows that Kracek was leading midget features only to have mechanical problems. Articles about him racing at Olympic Stadium suggest that he had a great deal of bad luck racing there as well. He still managed to go to victory lane six times at the legendary facility however. He would totally dominate action at several tracks that he competed against and was usually always very competitive.

While his life was cut short by a fatal accident, in the Golden Age of Midget Racing, Eddie Kracek proved to be one of the best midget pilots in the Midwest during his 14 year racing career. He raced against the best and he beat the best.